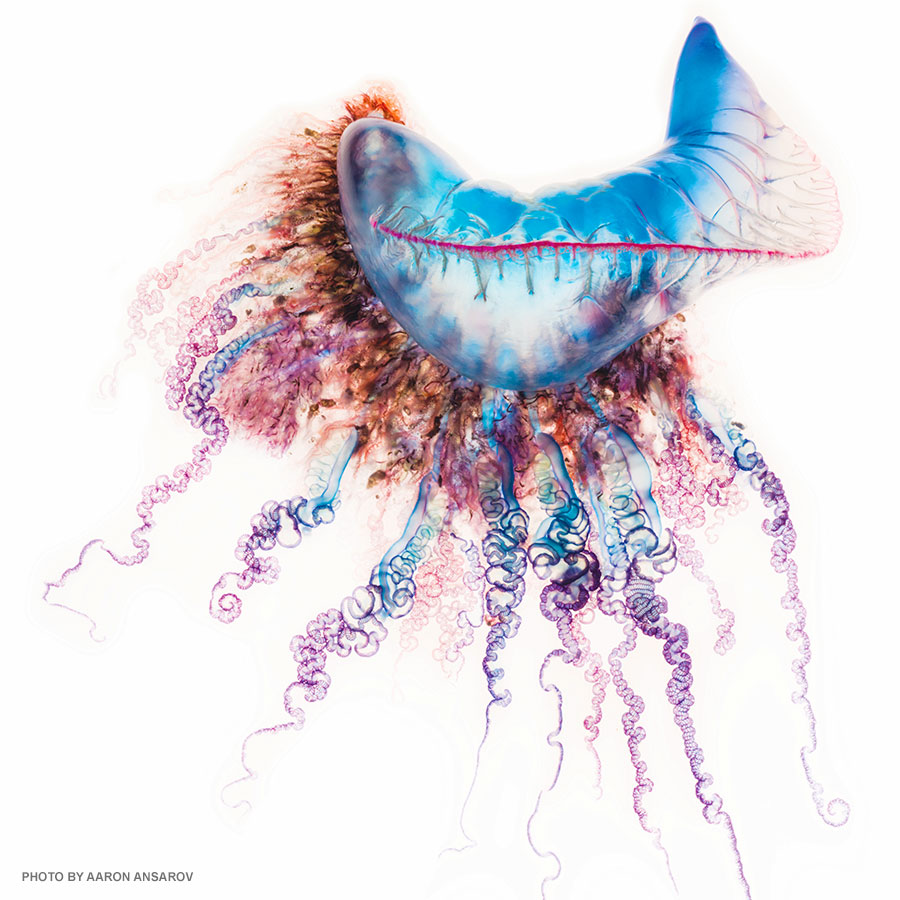 Portuguese men-o’-war are dangerous beauties. The deep-sea drifters float along the world’s warm ocean currents, dangling a stunning mass of bluish-purple fringe many fathoms deep. That fringe is fierce — and not only in a New York high-fashion way. Portuguese men-o’-war are carnivorous, and their haute-couture tassels are actually stinging tentacles, used to trap and paralyze small fish and plankton.

Often mistaken for jellyfish, Portuguese men-o’-war are in fact colonies of creatures called zooids. Four different types of zooids combine to serve different functions. Pneumatophores form the gas-filled bladder that allows the colony to float. Dactylozooids make up the venomous tentacles, which can grow to 165 feet long! Gastrozooids are in charge of digesting what the tentacles capture, and gonozooids take care of reproduction.

Camouflaged on the sea’s surface, transparent Portuguese men-o’-war don’t just bob about aimlessly. Their bladders have crests on top, which the animals can raise and lower like sails, allowing them to cruise the ocean like the fighting frigates for which they’re named. When the breeze picks up, the Portuguese man-o’-war inflates its crest and sails into the wind. When the wind blows really hard, however, the miniature blue boats get overpowered and pushed downwind.

That’s when we see them. During periods of sustained trade winds, Portuguese men-o’-war wash up onto Hawai‘i beaches. If you see a few decorating the sand, don’t touch them, and avoid going into the water.

If you do get stung, rinse off with fresh water. Use a stick, tweezers, or gloves to pick off any remaining pieces of tentacle from the skin. Remember: Portuguese men-o’-war aren’t jellyfish, so what works for jellyfish stings might aggravate this animal’s venom. Folk remedies such as vinegar, urine, and meat tenderizer simply don’t work. Severe stings can cause anaphylactic shock. Seek emergency help if necessary.