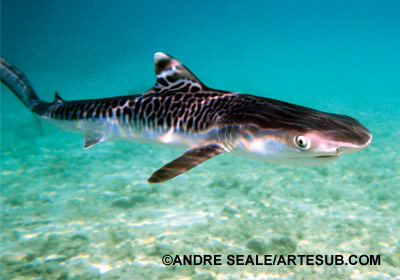 As summer turns to fall on Maui, wiliwili trees erupt in a profusion of brilliant blossoms across the Kanaio lava fields. Pre-Contact Hawaiians observed a connection between this forest and the sea: Pua ka wiliwili nanahu ka manō. When the wiliwili blooms, the sharks bite.

Modern science has proven the ancient proverb right—mostly. University of Hawai‘i scientist Carl Meyer has studied Hawaiian sharks for two decades. His latest research explores the movements of the Pacific Ocean’s apex predator: the tiger shark. Meyer’s studies confirm that during autumn, some tiger sharks travel from the Northwestern Hawaiian Islands to congregate around the main islands.

These pelagic travelers have two things in common: they’re big and they’re pregnant. Female tigers are larger than males. And for reasons still unknown, they prefer to give birth in the main Hawaiian Islands. Autumn is pupping season for tiger sharks.

Baby tigers hatch from eggs that develop inside of the mother shark’s body, a process known as ovoviviparity. Pregnant tigers don’t have placentas; rather, they produce uterine milk to nourish growing pups. Tiger moms have a long gestation period—up to sixteen months—and deliver between ten and eighty-three pups. Newborn sharks emerge with fins a few sizes too big for their bodies. Small and inefficient swimmers, they’re easy prey for other marine predators. Juveniles double their length within a year, but don’t outgrow their “awkward stage” until around four years of age and eight feet in length.

But do they bite? Very, very rarely. Forty shark species inhabit Hawaiian waters; only two are known for biting humans: whites and tigers. Even those species generally bite people by accident. “Shark attack” is a misnomer. Last year in Hawai‘i nine people suffered shark bites. None was fatal. No one has died from a shark encounter here since 2004. Meanwhile, humans kill more than 11,000 sharks worldwide per hour.

Sharks are critical to healthy oceans. Many native Hawaiians revere sharks as ‘aumakua, powerful ancestral spirits. Sharks are magnificent ancient creatures, not the monsters depicted in horror films. When you enter the ocean this fall, show respect. Remember that it’s not just the sharks’ home; it’s their nursery.