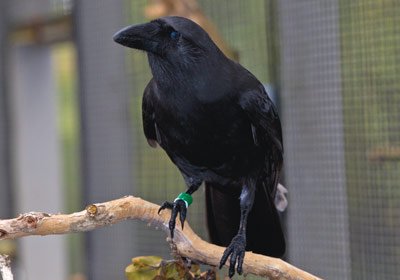 In ancient Hawaiʻi, specialized chanters known as ʻalala broadcast the chief’s messages during battle. Their technique involved a quivering of the vocal chords to produce melodious, haunting sounds that traveled over long distances.

ʻAlala is also the name of the native Hawaiian crow, Corvus hawaiiensis. And May is when the first baby crows of the season start squawking. The Hawaiʻi Endangered Bird Conservation Program has been raising ʻalala in captivity since 1993, after the world population plummeted to twenty-three birds. ʻAlala are currently extinct in the wild — but that might change soon.

ʻAlala-hatching season is high intensity at the conservation program’s two facilities in Olinda, Maui, and Keauhou, Hawaiʻi. After a female ʻalala lays a clutch of bluish-green eggs, trained specialists place them in incubation and turn them by hand nine times a day. Some chicks hatch easily. Others need assistance, which Program Manager Richard Switzer calls “the avian equivalent of a Caesarian section.” Bird midwives carefully peel away eggshell piece by piece, pausing to investigate for signs of healthy development, before gently extracting the chick.

For the first fifteen days, sleep-deprived bird handlers feed their peeping, featherless charges every hour. They use crow hand puppets to prevent the birds from imprinting on humans. Last year, fifteen chicks fledged, pushing the ʻalala population past the 100 mark for the first time in decades.

Fossil records show that five Hawaiian crow species once populated the Islands. By the 1800s only one remained, on Hawaiʻi Island. Once abundant in the forest, ʻalala played a crucial role as the largest seedeater, dispersing seeds in its droppings. But the birds fell victim to introduced rats, cats, and mongoose, and farmers’ shotguns.

The Hawaiian crow boasts a more diverse and musical vocabulary than its mainland cousins. We should all be so lucky as to hear the reverberating caws, squawks, and trills that inspired the ancient chanters. And we just might be: program managers plan to release ʻalala back into the forest in the fall of 2014.