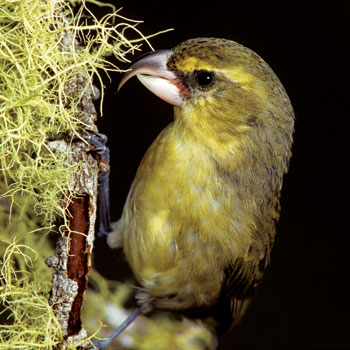 Forget chocolates; fat, juicy grubs win a lady parrotbill’s loyalty. Males use their signature beaks to plumb dead logs for beetle and moth larvae. “The male will sing to the female, then feed her and sing again,” says Becker. Proving he’s the ultimate provider is critical, since the female won’t be able to forage for herself while brooding their single nestling.

Parrotbills brood from February to June, though don’t expect to stumble across a nest. Only around five hundred wild parrotbills exist today, in the remote rainforests of East Maui. Historically they inhabited lower elevations, but avian malaria pushed the population up the mountainside, where infected mosquitoes can’t reach them.

“They’re cornered in this wet, windy area where the disease doesn’t survive,” says Becker. “Parrotbills are one-child families. They have one baby a year, in bad weather. If it survives, they care for it up to a year and a half. That’s part of why they’re on the edge of extinction—they send their kid to Harvard and pay for it.”

Habitat destruction and predation by cats and mongooses have further decimated this federally endangered species. Feral pigs ravage the native trees and understory that the birds rely on for favorite grubs and nesting spots. “We’re going to lose them if we don’t get the forest restored on this island,” says Becker. “We really need forests fast.”

Meanwhile, parrotbills are doing their best to multiply. The Maui Forest Bird team monitors around thirty mating pairs. Last year, “61 percent had a baby at the end of the season,” she says. “One pair had twins.”