Story and photo by Sunny Savage

With its intoxicatingly aromatic white flowers, leathery leaves, and delicious fruit, it’s curious that the Natal plum (Carissa macrocarpa) is so often overlooked for the treasure it holds. Natal Plum Holiday Relish has become a tradition at my holiday table, making its way into many meals during this festive season. So few people know that the fruit is edible once it turns a bright, cheery red, and the forager is often awarded a generous harvest, with multiple fruitings throughout the year.

The shrub was first planted in Hawai‘i around 1905, but not for its fruit. The plant originates from the KwaZulu-Natal province in South Africa, where it goes by several names, like carissa fruit and num-num. It evolved with elephants and other large game, and developed sharp, twice-forked spines to protect those red gems of fruit. Its thorns, along with its drought tolerance, have made the plant widely popular as a hedge throughout the Islands.

It is important to only eat the fruit once it’s fully ripe, as green fruits and other parts of the plant are toxic. Don’t be scared of the white latex the fruit oozes; that is normal and not harmful. The seeds can also be eaten without harm. Always ask permission before harvesting from private property. Fruits can be dehydrated, made into Natal plum-and-toasted-coconut ice cream, infused in vinegar, used in chutneys, and much more!

Mix all ingredients and serve. 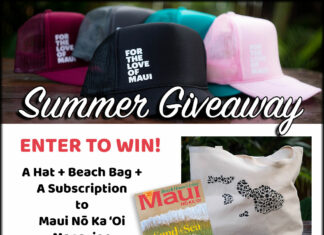 We'll pick a winner every week in June!