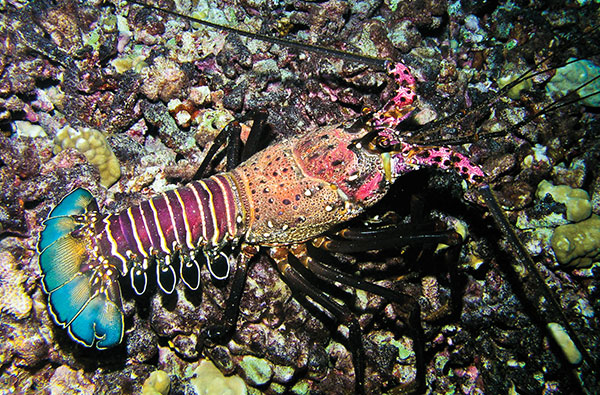 Who do those footlong antennae waving underwater belong to? Hawaiian spiny lobsters, or ula. Starting May 1st, the creeping crustaceans can safely come out of hiding. Lobster season is closed through August 31 to allow them a chance to reproduce.

Hawaiian spiny lobsters (Panulirus marginatus) spawn during the summer months and from November through December. Females produce up to a half-million bright-orange eggs, which they hold against their abdomens with their swimmerets. After about four weeks, leaflike larvae hatch. They drift amid deep ocean currents for nearly a year before settling to the bottom and assuming their adult shape and paint-box coloring.

Ula are endemic to the Hawaiian archipelago. These cave dwellers emerge at night to hunt other crustaceans, sea cucumbers, and starfish. They’re also scavengers, serving their community by keeping reefs clean. Once abundant, these marvelous marine invertebrates are vulnerable to overfishing. They’re now rare finds in the wild.

John Earle, a deep-sea diver and research associate at Honolulu’s Bishop Museum, confesses that he bagged plenty of “bugs” while diving with his father in the mid-1950s.

“Soon lobsters covered me, peering into my facemask with dark, impassive eyes. I sensed curiosity and even Mind in these creatures. . . . I felt a bond with them, a bond that spanned the vast evolutionary distance between us.  I have not collected or eaten lobster since.”

“There were few scuba divers back then and spiny lobsters were plentiful,” he says. “Like the buffalo hunters of old, we pillaged and sacked this seemingly unlimited resource.” Dad and son would often stagger ashore, their bags “bulging with lobsters squeaking chitinously in futile protest.” Years later, Earle had an underwater epiphany. “I chanced upon a deep ledge lined with waving antennae. Something made me pause.  I lay motionless on the sand outside the ledge. About twenty-five spiny lobsters watched me back. After a few minutes an Old One tentatively advanced.  I was tapped and probed with antennae, felt and fondled with lobster legs and other twitching sensory appendages. Soon lobsters covered me, peering into my facemask with dark, impassive eyes. I sensed curiosity and even Mind in these creatures. . . . I felt a bond with them, a bond that spanned the vast evolutionary distance between us.  I have not collected or eaten lobster since.”

For an aquatic awakening of your own, go for a summer night dive. You’re bound to discover critters as curious as you are.