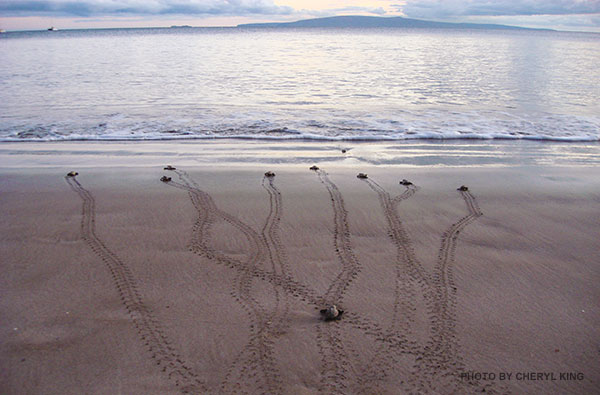 Beneath the starlight, the sand begins to boil with life. A tiny head emerges, followed by a flipper. Soon turtle hatchlings — each no bigger than a toddler’s hand — swarm the beach, heroically crawling toward the sea.

Since 1996, Hawai‘i Wildlife Fund volunteers have spent sleepless nights patrolling Maui beaches, anticipating this magical moment. Two sea-turtle species nest here: honu, the green turtle snorkelers often see, and honu‘ea, the endangered Hawaiian hawksbill. While most honu nest in the remote reaches of the archipelago, honu‘ea nest exclusively in the main Hawaiian Islands, primarily on the Big Island. With fewer than 100 nesting hawksbills statewide, the success of each nest is crucial for the survival of the species.

Cheryl King, the Fund’s vice president and research director, is Maui’s sea turtle expert — and midwife of sorts. She has closely monitored honu‘ea and honu since 2000. Finding these elusive reptiles is no easy feat, she says. “We’ve identified eight nesting females on Maui, which is as much of an accomplishment as it is a reality check.”

King knows each nester by name and tag number. Every few years, mature female hawksbills migrate to the beaches where they were born. With powerful flippers, they dig sandy holes and deposit 180 eggs. Female honu‘ea can lay as many as five nests per season. 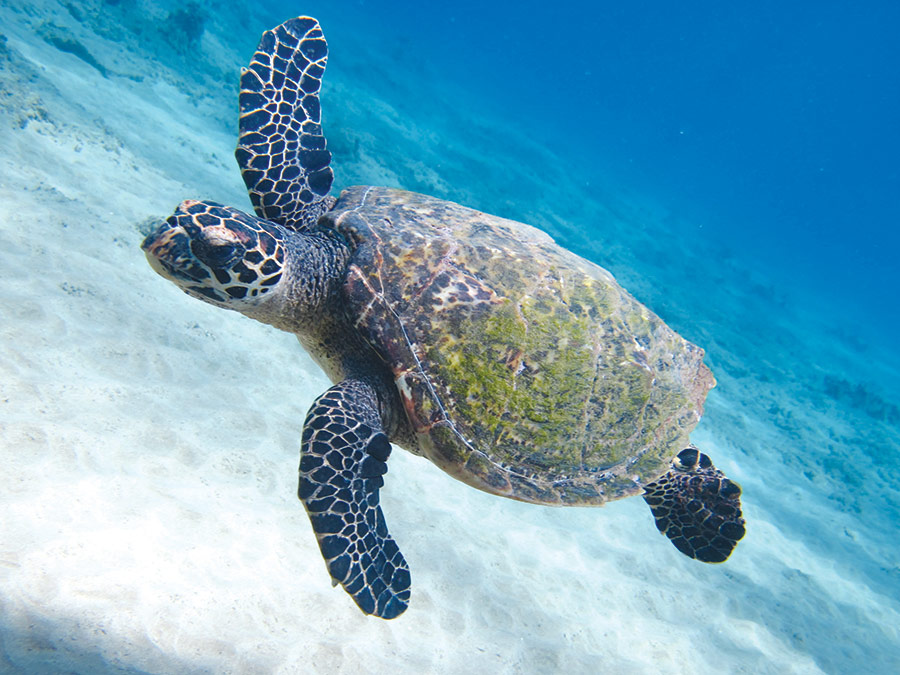 After two months’ incubation, baby turtles hatch. Only a tiny fraction will survive to adulthood. First they must dig free of the nest, then run the gamut of hungry birds, crabs, mongoose, cats, and dogs to reach the relative safety of the sea. Dehydration and disorientation are dangers; even human footprints present big hurdles for baby turtles. Instinctively, hatchlings crawl toward the brightest horizon — usually the star-filled night sky reflecting off the ocean. But electric lights can lure little turtles inland, into the deadly path of traffic.

That’s why King and her volunteers keep a sharp eye out for turtle tracks, locating and monitoring nests 24/7 during nesting season. Egg laying can begin as early as May, with hatchings occurring well into November or December. As this issue goes to press, the first hatchlings are expected by mid-August, and approximately every three weeks thereafter. King welcomes new volunteers, day or night, even for just a couple of hours. “We get pretty tired, by fall.” Witness this miracle yourself. Sacrifice a night’s sleep to nest-sit.

Enter to win a prize from an Aipono-winning restaurant!