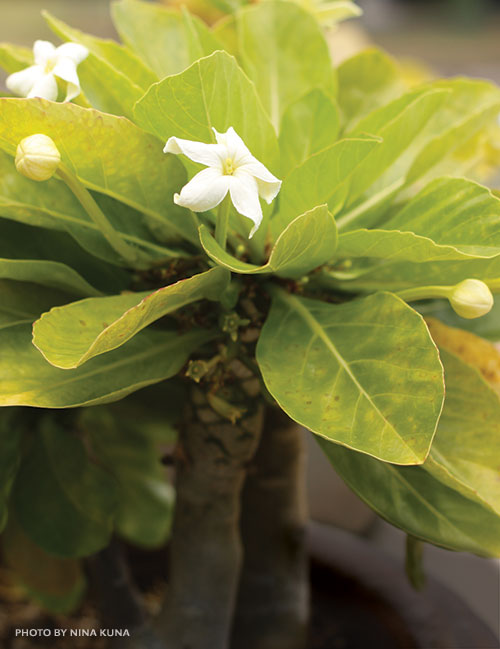 Some thirteen million years ago, a lone lobelia found its way to the Hawaiian Islands. In one of the world’s greatest instances of adaptive radiation, this leafy pioneer evolved into more than 125 distinct species, including two unusual looking shrubs: Brighamia insignis and Brighamia rockii. Both have short, bulbous stems topped by a rosette of wide, leathery leaves. B. insignis belongs to the islands of Kaua‘i and Ni‘ihau and has creamy yellow flowers, while B. rockii is endemic to Maui, Lāna‘i, and Moloka‘i, and has white blooms. They’re named after William Tufts Brigham, the first director of Honolulu’s hallowed Bishop Museum, though the plants are better described by their shared nickname: cabbage on a stick.

Botanists have gone to great lengths for these rare “cabbages,” which grow in the remotest of regions: Hawai‘i’s windswept sea cliffs and offshore islets. Both species are critically endangered, thanks to introduced goats, rats, spider mites and slugs that nibble the plants’ leaves. Their native pollinator — a long-tongued hawk moth — is either extremely rare or extinct. So scientists do the moth’s work, rappelling 1,000 feet to hand-pollinate flowers and collect seeds. Despite these heroics, Hurricane Iniki nearly wiped out B. insignis; a single wild plant currently survives on Kaua‘i. B. rockii has fared little better. Small populations persist on Moloka‘i, on the steep ridges above Kalaupapa and Hālawa and on the tiny islet of Huelo off the sea cliffs on Moloka‘i’s north shore.

Luckily, the cliff dwellers are easy to propagate. The daringly collected seeds were dispersed to gardeners worldwide, and fall is the time to find their flowers. From September to November, star-shaped blossoms emerge, releasing a marvelous perfume reminiscent of violets or honeysuckle. To catch a whiff of this rare bloom, visit Maui Nui Botanical Gardens in Kahului. Better yet — purchase one of your own from Ho‘olawa Farms or Maui Native Nursery.