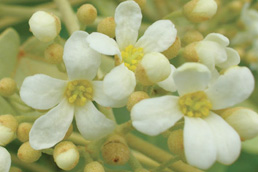 Hawaiian fishermen of old discovered the universal trick for calming choppy water: pour a little oil on the surface. In the Islands, oil could be readily found in the hard nut of the kukui tree. Those fishing for fat uhu (parrotfish) in rough seas would chew roasted kukui nuts and spit them onto the water. A thin film would spread on the surface, stilling the chop and increasing underwater visibility.

That’s not the only way the kukui improved ancient Hawaiians’ vision. The kukui, or Aleurites moluccana, is also known as the candlenut tree. Its unctuous kernels served as dim, slow-burning torches when pierced and strung on bamboo sticks. The Hawaiians procured brighter light from their carved stone lamps, which held a pool of kukui nut oil and a strip of kapa (barkcloth) as a wick. How did the ancients light these fires? By rubbing kukui sticks together with tinder.

Originally from the Indo-Malay region, this valuable plant migrated to Hawaii with the first settlers from Polynesia. While not native to these Islands, it was designated the honorary state tree in 1959. It’s considered a symbol of enlightenment.

The kukui played a special role during Makahiki, the four-month winter festival celebrating Lono, the god of agriculture, fertility, and peace. Kukui was thought to be a kinolau (physical manifestation) of Lono. Pig heads, carved out of kukui wood, were set on the ahupuaa (literally, pig altars) that marked the boundaries between traditional land divisions. Gifts were left here for the royal procession that circumnavigated the Islands once a year.

During Makahiki (which this year runs from early November through February), warfare and strenuous labor were traditionally banned, granting both the people and the land time to rejuvenate. If that’s not enlightened, we don’t know what is.