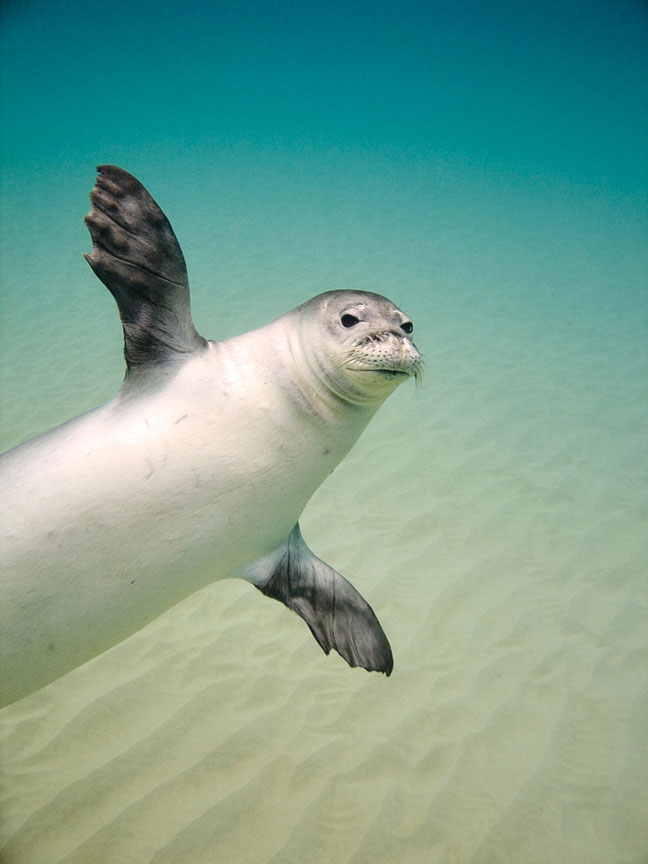 It’s pupping time for one of the world’s most endangered animals, the Hawaiian monk seal. Monk seals are named for the soft, grey-brown folds around their neck that resemble a monk’s cowl, and for their solitary behavior—unusual in seal species.

Known to early Hawaiians as ‘ilio holo i ka uaua, or the “dog that runs in rough waters,” the monk seal has been riding the Hawaiian surf for fifteen million years. That’s older than all the inhabited Hawaiian Islands! Marine biologists have much to learn about this “living fossil,” and were recently stunned when a deep-sea probe filmed a seal foraging at an astonishing 1,770 feet beneath the surface.

Most Hawaiian monk seals live in the uninhabited Northwestern Hawaiian Islands, where they give birth year-round, peaking between April and June. Pregnant seals require quiet, sandy beaches where they will be safe from pelagic predators. Jet-black pups are born on land and nurse for six weeks, during which time they can grow from 30 to 200 pounds. Biologists are crossing their fingers that 2009 will be a banner year for births in a population reduced to around 1,200 individuals.

The seals’ story would be unbearably dire if it weren’t for a surprising rebound in the population within the main Hawaiian Islands. Numbers are small, but growing—twelve pups were recorded here in 2006, thirteen in 2007, and eighteen last year. Even more encouraging: pups born here are born healthier, with better survival rates than their Northwestern cousins. Biologists attribute greater food availability and fewer predators to this success.

Hawaii’s official state mammal needs all the help it can get. If you’re lucky enough to spot a Hawaiian monk seal resting on the sand, give it a wide berth. It might just be a nursing mama!