When the Polynesians first made landfall in Hawai‘i, their closest relative here was a bat. Tiny, acrobatic, and covered in resplendent fur, the Hawaiian hoary bat is the only land mammal native to these Islands. Its ancestor, the North American hoary bat, was likely blown here by a storm around 10,000 years ago. Over many generations, its descendants evolved into a novel species. The Hawaiian bat is smaller than its mainland relative — and far more rare. It’s listed as a federally endangered species. The Hawaiians called the night flier ‘ope‘ape‘a, a poetic name that compares the animal’s radial-spoke wing to the wind-filled sails of a canoe and the jagged bottom half of taro leaves shorn for cooking.

The solitary bat roosts in trees and uses echolocation to snatch moths, beetles, termites, and other night-flying insects in mid-air. From May to July, females give birth to twins. A mother will carry her thumb-sized pups on nightly forages until the youngsters are strong enough to hang onto the roosting site. Then she teaches them to hunt. An adult ‘ope‘ape‘a has a foot-wide wingspan, weighs  about as much as a mouse, and can zigzag between shadowed tree trunks or zip over the twilit ocean at 60 miles an hour. 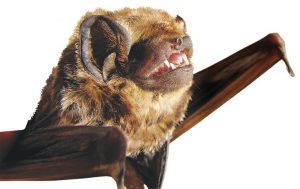 ‘Ope‘ape‘a are found from the sea to the summit. They escape winter’s wet weather by migrating up the mountain slopes — possibly following the lead of the Hawaiian koa moth, a favorite snack. Scientists speculate that cool, high-elevation temperatures allow the bats to rest at a lower metabolism. During the warmer months, they tend to forage closer to shore, which makes summer the best time to spot ‘ope‘ape‘a. Just after sunset, when the trees are silhouettes against the still-blue horizon, look for a wee shape swirling and somersaulting in the sky.