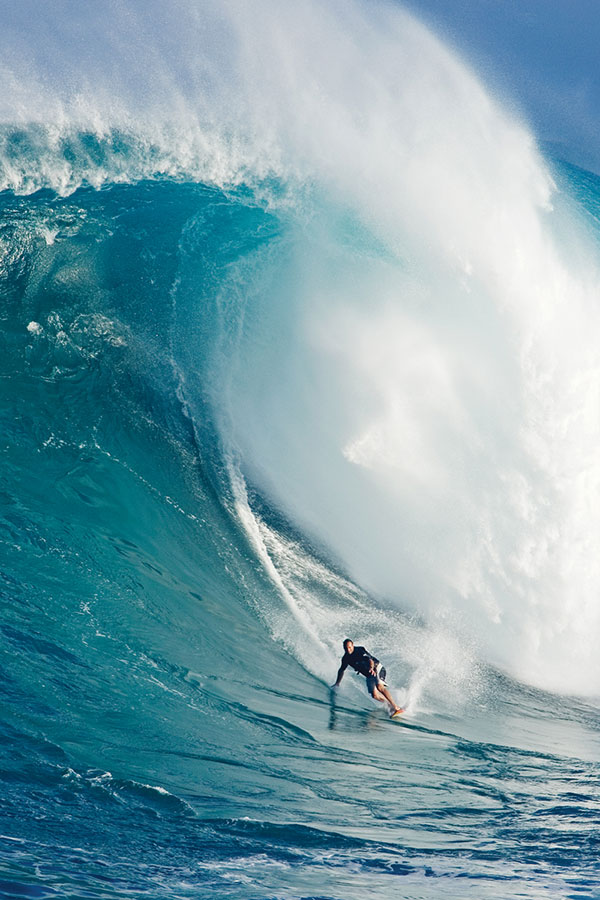 For Islanders, nothing signals winter quite like the smell of deep ocean swells and the pounding thud of giant surf.

Throughout January and February, big waves roll onto Maui’s north shore, exhaling salty gusts that linger in the air. When especially big swells hit, the telltale ripples can be seen in the otherwise placid Pacific from halfway up Haleakala’s summit. Down in Pa‘ia town, lifeguards hoist red warning flags at the beach as surfers hoot with excitement and wax their boards in a hurry. Windsurfers, kite-boarders and tow-in surfers grab their gear and head out. Amateur and professional photographers line up along the shore to capture footage of daring wave-riders in action.

What generates these monster winter waves? The same fierce weather that dumps snow on the Northern Hemisphere. Low-pressure weather systems starting in Alaska ultimately deliver pumpin’ surf to Hawai‘i. (Summer’s slower, gentler surf comes to the Islands courtesy of storms generated in Australia and at the South Pole.) The stronger the storm winds, the faster and longer they blow across the open ocean, the bigger swells they generate. When those swells come in contact with Hawai‘i’s steep shorelines, they crest, forming rideable waves.

Some of the world’s biggest rideable waves roll up onto Maui’s northeastern shore at Peahi Bay. Around twelve times a year, storms at sea create swells large enough to trigger cresting waves at the world-famous break known as “Jaws.” When Jaws is breaking, the excitement in the air is palpable. The thundering barrels can be heard from miles away.

Thrill-seeking, experienced surfers are towed by jet-skis to the moving walls of water that can tower between forty and seventy feet high. Spectators jam the pineapple-field roads leading to the cliff-top viewing area. Helicopters buzz overhead, documenting record-breaking rides. On Maui, our winter wonderland isn’t made of snowflakes, but the glistening white foam of storm-induced surf.