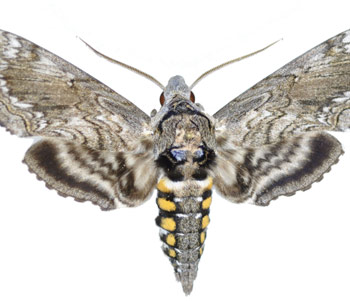 Perhaps you’ve been startled by a bat-sized moth beating its pinions against your window. In winter months on Maui, Kaho‘olawe, and Hawai‘i Island, the rare and lovely Hawaiian sphinx moth, Manduca blackburni, takes wing.

It’s named for Reverend Thomas Blackburn, a nineteenth-century beetle maniac — among the first Westerners to study the spectacular insect fauna of Hawai‘i. In 1880, near Honolulu, Blackburn captured several moths with brilliant orange spots decorating their furry abdomens. They were common then in the night skies above the Islands.

Within 100 years, these nocturnal fliers had vanished. Biologists presumed the species extinct and blamed the usual suspects: introduced predators, overzealous collection, and habitat loss. But the story didn’t end there.

In September of 1984, a young biologist was out surveying the brittle, arid terrain of Kanaio in East Maui. Stopping to photograph a rare ‘aiea tree in bloom, she found a pudgy caterpillar on its leaves. Then another. The tree showed evidence of an entire colony of caterpillars. She brought one back to the lab, where it later pupated and hatched. It was the missing sphinx moth.

Further surveys turned up more larvae — nibbling not on native ‘aiea but on tree tobacco, a nasty weed. M. blackburni feeds on plants in the nightshade family, much like its closest relative, the American tobacco hornworm. ‘Aiea is a Hawaiian nightshade, as is popolo, a large shrub with glossy black fruit. Biologists theorize that as these native species disappeared, the moth shifted to the increasingly available tree tobacco.

This presents a conundrum for conservationists who’d like to preserve the moth while controlling its junk food. “We don’t know if the moth prefers ‘aiea or tobacco, or which plant it survives on best,” says state entomologist Cynthia King. Until native habitat can be restored, the weed gets a reprieve.

“The big ones will swing around and chatter at you,” says King. “They’re beautiful relics of the dryland forest ecosystem.”