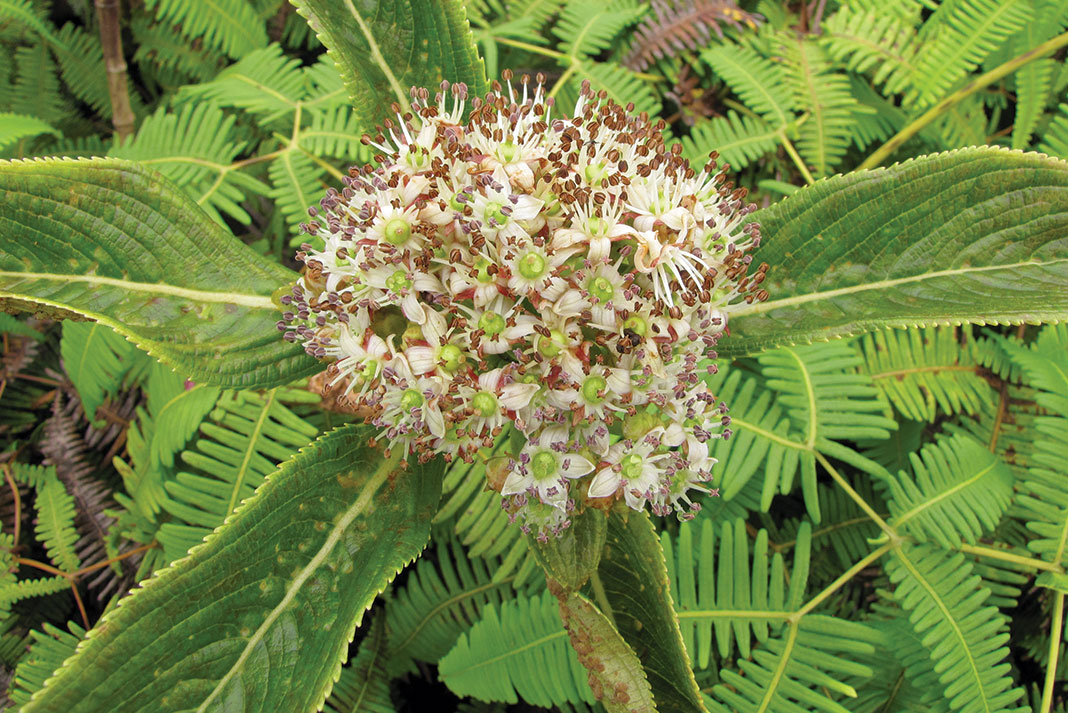 Springtime on the mainland is marked by the resurgence of flowers. One by one the crocus, daffodil, and narcissus push forth from the frostbitten ground and open bright faces to the warming sun. The bare branches of the hydrangea, that popular deciduous shrub, suddenly grow flush with serrated leaves and pom-pom flowers. While many of these harbingers of spring are absent from the Hawaiian Islands, the archipelago does have its very own endemic hydrangea: Broussaisia arguta, the lovely kanawao.

Beautiful and distinctive kanawao shrubs decorate rain forests across Hawai‘i. The understory plant’s leaves are recognizably those of a hydrangea, though a little larger and more leathery than the foliage found on their domesticated cousins. Like common hydrangea cultivars, their blossoms range from creamy yellow to magenta, lavender, and blue, with many shades in between — but the resemblance stops there. Rather than the flat, papery petals found in flower shops worldwide, Hawaiian hydrangeas have clusters of star-shaped blooms spouting profusions of long stamens. Nestled within a rosette of leaves, the showy native blossom looks much like a firework frozen in time.

Also unlike its mainland counterparts, kanawao is both evergreen and dioecious: it blooms year-round, and it manifests as either male or female. Many rare Hawaiian fauna can be found crawling about this common forest plant. Happy faced spiders often cling to its stems, and endemic tree snails crawl along its leaves, grazing on fungus. Kiwikiu, the endangered Maui parrotbill, loves to dig its hooked bill into ripe kanawao fruits in search of juicy grubs. Birds aren’t the only ones known to snack on the berries, either. According to Hawaiian oral tradition, kanawao symbolizes fertility. Revered ethnologist Mary Kawena Pukui reported that Hawaiians ate the fruits to increase their chances of conception; they referred to increase in chiefs as a fruiting kanawao.

To see this beauty in the wild, take a hike up the Waihe‘e Ridge Trail or visit The Nature Conservancy’s Waikamoi Preserve.