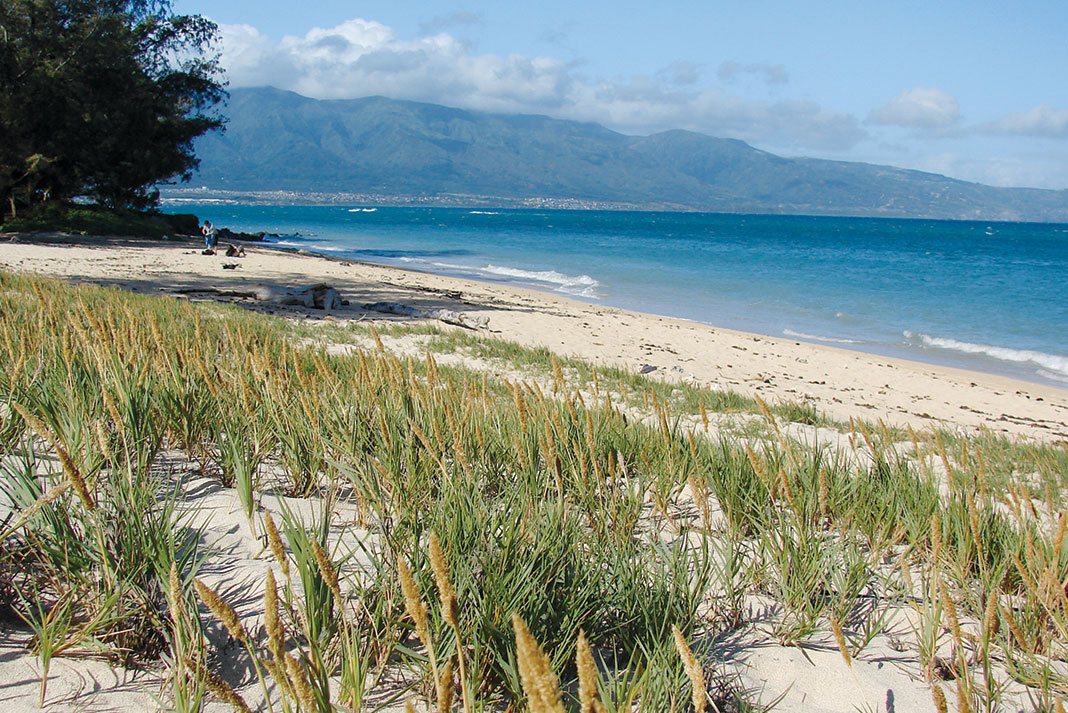 During the winter months, heavy surf pounds Maui’s coastline. Beaches change shape and even temporarily disappear. The booming clatter of rocks turning in the tide can be heard far from shore. Surfers wear perma-grins and call in late to work, if at all. In the midst of all this action, a humble grass is doing heroic work: clinging to the dunes and preventing coastal erosion.

‘Aki‘aki, also known as seashore rush grass, is an indigenous ground cover that thrives in salty, sun-blasted environments. Stiff and shiny, the pistachio-colored grass can be seen fringing beaches across the Hawaiian archipelago and the Pacific. When it blooms, golden seed heads rise up between the green blades. The hardy plant drops its seeds into sandy substrates and sends runners out in every direction, forming delicate mats of rhizomes that effectively hold on to the wave-battered shore.

The attractive grass is especially thick at Kanahā Beach Park, where it blankets the small, sloping dunes alongside the road. By trapping sand and moisture within its root system, ‘aki‘aki creates habitat for other species, including the rare and endangered ‘ōhai, a silvery, vinelike shrub with arresting scarlet-orange blossoms. Along the coast at Kapalua, native seabirds build nests in dunes capped with ‘aki‘aki.

Hawaiians were adept at recognizing patterns in nature and often used the same name for different species bearing similar traits. ‘Aki‘aki also refers to a limu (seaweed) that grows in the intertidal zone. Both species—the land and the sea plant—are coarse and bristly. To further confuse matters, ‘aki‘aki is just one of many names for the widespread coastal grass; another is mahiki. The word mahiki means “to cast out spirits, exorcise.” In times past, Hawaiians used mahiki grass in ceremonies meant to purge evil spirits. To this day, the grass may be incorporated during ho‘oponopono (conflict resolution) therapy to “mahiki ana i nā mea ‘ino,” treat the deep troubles.