With a name like “wandering tattler,” the grey shorebird that dances with the tide during the winter months in Hawai‘i must have some interesting tales to tell. Known to scientists as Tringa incana, tattlers spends the summer nesting near streams in the Alaskan tundra. When the weather starts to cool, the birds fly south to Hawai‘i. Between late August and April, solitary tattlers can be found foraging for crabs on rocky coastlines, beaches, and mudflats throughout the Islands. The stocky, slate-grey birds have greenish-yellow legs and long black bills. They’re known to bob their tails up and down as they peck the wet sand in search of salty morsels. 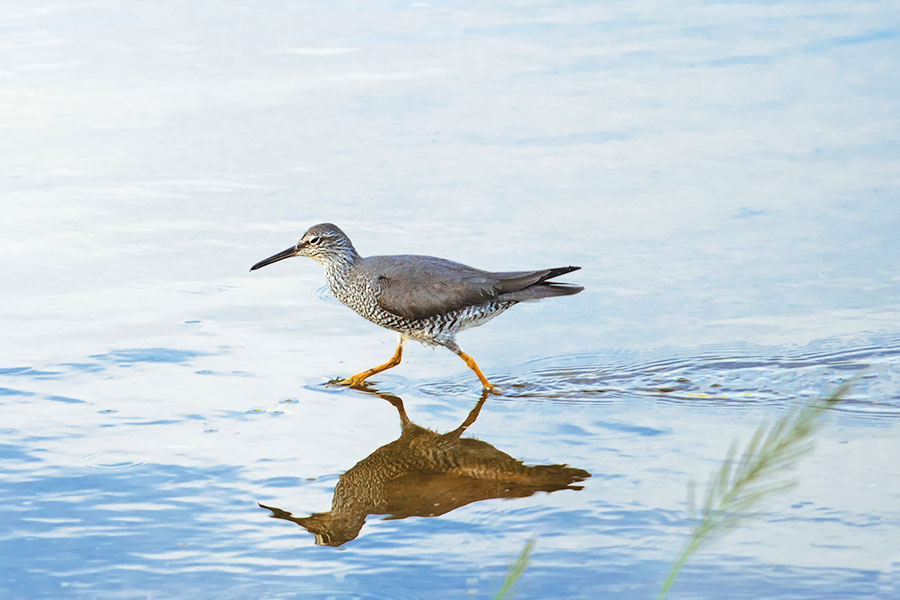 The tattler earned its nickname for its four-note whistle, a musical alarm it sounds whenever predators pass by. Ancient Hawaiians called the bird ‘ulili, and recognized its role as a messenger and scout. Hawaiian historian Abraham Fornander tells of a Moloka‘i chief who kidnapped another man’s wife and employed an ‘ulili and a kolea (Pacific golden plover) to spy for him and foil any rescue attempts. When the woman’s son came to retrieve her, the birds pulled at his hair — high drama for typically docile shorebirds.

The late singer Israel “Iz” Kamakawiwo‘ole popularized a song celebrating the ‘ulili. The tempo mimics the shorebird’s staccato movement as it chases marine animals swept up in the incoming tide. The lyrics are especially evocative when sung in rounds. ‘Ulili also refers to a lesser-known hula instrument. Three gourds are strung on a dowel, with a cord tied to the middle. A hula dancer holds the center gourd and pulls the string, which winds and unwinds like a yo-yo. The two outer gourds spin, causing the seeds within them to produce a pleasant whirring sound.