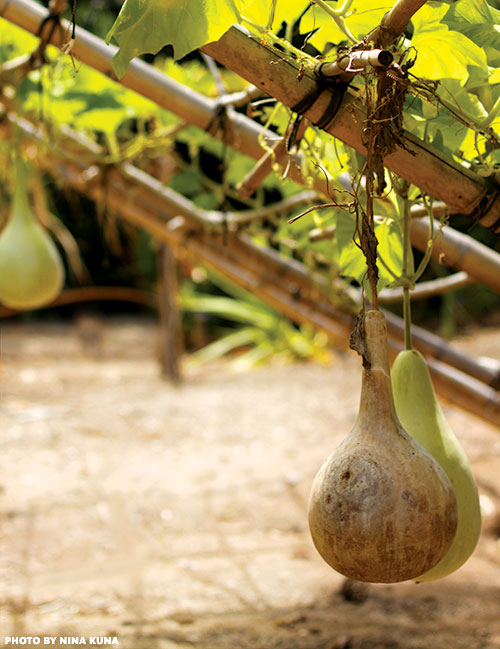 Pumpkins are synonymous with fall on the mainland, but in Hawai‘i, a different autumnal gourd ripens in the fields. The ipu, or bottle gourd (Lagenaria siceraria), came to these islands with Polynesian voyagers in their ocean-crossing canoes. The flowering vine found fertile soil here and grew into a pillar of Hawaiian culture.

Hawaiians of the past didn’t have ceramic bowls or plastic coolers; instead, gourds served as vessels for water, poi, dye and medicine. Fishermen stowed lures and hooks in small ipu that floated if knocked overboard. Lidded gourds were often wrapped in kōkō, decorative net carriers. Hawaiian farmers were known for their ipu nui — especially large gourds. Priests cut eyeholes in these hollowed, inverted gourds, wove tassels into the crown and wore them as ritual headgear. To this day, hula practitioners rely on ipu heke drums to create their rhythm; made from two gourds joined head to head with ‘ulu (breadfruit) gum, this instrument is unique to Hawai‘i. Dancers slap its sides and pound it against a woven mat on the floor to produce resonant beats.

The ipu is a kinolau (physical manifestation) of Lono, the Hawaiian god of fertility and farming, and it appears in many legends. The famous gourd of La‘amaomao was said to contain all the winds of Hawai‘i, which could be called forth by chanting their lyrical names. Some people native to Ka‘ū on Hawai‘i Island believe they descend from twin girls who hatched from a gourd and became warriors.

Ipu aren’t easy to grow nowadays; invasive fruit flies sting them. Farmers in Kula fastidiously tend their crops and coddle baby gourds, covering them with mosquito netting and rotating them daily to ensure that they grow round and even. Some farmers constrict the gourds to shape them as they grow; others decorate freshly picked ipu with ancient or modern flourishes. Drum makers reach through the gourd’s neck to scrape out the insides. The cleaner the gourd, the better the sound. “The first sound of a drum is like a baby’s first cry,” says kumu hula (hula teacher) Kapono‘ai Molitau.