Story by Shannon Wianecki | Photo by the Cesare Brothers 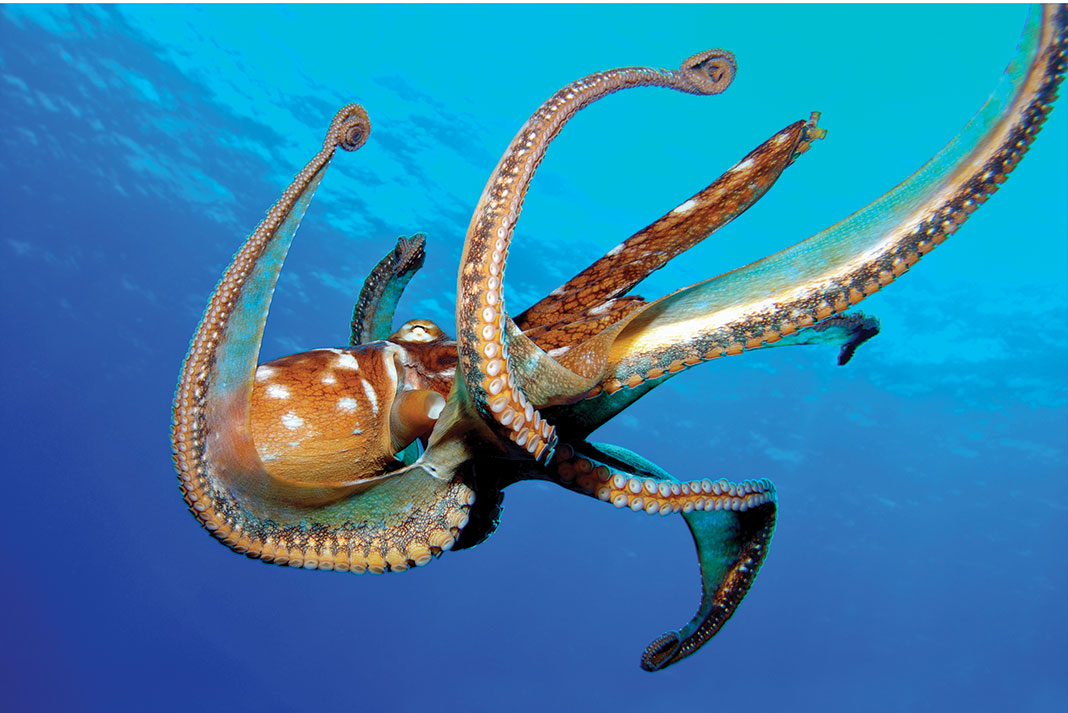 He‘e (octopuses) have brief but magical lives. They mature within a year, mate, and die shortly after. What happens in between is the stuff of sci-fi flicks and Beatles’ songs.

The “day octopus,” Octopus cyanea, is the most common cephalopod in Hawaiian waters. By day it slinks along the reef, hunting crabs and snails. At night it slips into a tiny cavity to rest. Divers can spot an octopus den by the empty shells piled at its entrance — otherwise known as an “octopus garden.”

Spotting he‘e at large underwater isn’t so easy. These masters of camouflage are intelligent and as slippery as Houdini. They can alter their appearance in seconds and escape just about any enclosure. Sensory organs on their eight arms allow them to perfectly mimic the colors and textures of surrounding corals. If threatened, he‘e can shoot a cloud of ink and disappear in the opposite direction. According to Hawaiian ethnologist Mary Kawena Pukui, octopus ink, or kūkae uli, was a nickname for those who created distractions to escape punishment. The term applied to prostitutes during Hawai‘i’s whaling days.

Octopus sex is otherworldly. A male he‘e pursues a female across the seafloor, their bodies transforming in shape and color as they move. Finally, he unfurls a come-hither tentacle — a specially adapted arm loaded with spermatophores — and slips it into her mantle cavity. Then off he goes. She retreats into her lair, which she decorates with strings of fertilized eggs. For six weeks, she gently fans oxygenated water across her brood without pause. She starves to death, but her progeny repopulate the reef.

A Hawaiian proverb indicates that now’s the time to look for these mystifying creatures: Pua ke kō, kū mai ka he‘e. “When the sugarcane flowers, the octopus appears.” Hawaiian sugarcane, or kō, blooms in November, which corresponds with peak abundance of octopuses on the reefs.