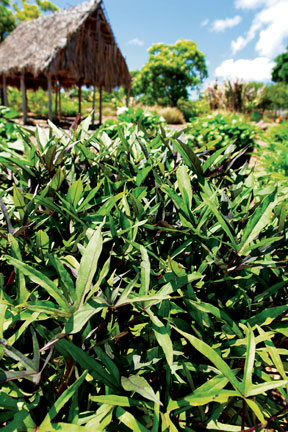 The sweet potato, or ‘uala, is one of Polynesia’s most mysterious plants. Early trans-Pacific voyagers carried ‘uala cuttings with them as they settled new islands. But unlike the other “canoe plants,” which originated in Southeast Asia, the sweet potato is native to South America. At first, botanists assumed that the American spud was introduced by Spanish explorers in the 1500s. But archeological studies later proved that Polynesians had been cultivating ‘uala for five centuries before the first European ship dropped anchor in the Pacific.

So how did pre-Contact Polynesians come to possess the sweet potato? Did viable plants drift here aboard a South American raft? Or did skilled Polynesian wayfarers sail against prevailing headwinds 5,000 miles to Peru and back with the tasty tuber in tow?

Regardless of how it found its way here, the sweet potato became one of Hawai‘i’s most important foods, a complement to taro. ‘Uala thrives in drier, less arable landscape than taro and quick-growing varieties were planted during times of famine. Hawaiians, Polynesia’s most adept agriculturalists, cultivated numerous varieties of ‘uala. Names like Pele’s smoke and piko nui (swollen navel) described a unique variety’s leaves, tubers or growing habits. The dried, heart-shaped leaves provided extra cushioning under lau hala or makaloa mats. Nursing mothers wishing to stimulate their milk supply wore open lei of entwined ‘uala leaves, which dripped white, milky sap. The sap was also used to treat asthma, chest congestion, constipation, and insomnia. Humans weren’t the only ones with an appetite for ‘uala, either. Farmers fattened domestic pigs on the fleshy tubers. Fishermen continue to catch ‘opelu on hooks baited with steamed chunks of sweet potato.

Of the 230 varieties of ‘uala once found in Hawai‘i, only around 40 remain. Today, when someone refers to “Hawaiian sweet potato,” they most likely mean the popular, bright purple variety introduced more recently from Okinawa. That sweet spud traveled the opposite direction—from South America across the Atlantic to Southeast Asia, arriving in Hawai‘i with Japanese sugarcane workers in the late 1800s. This year, while enjoying sweet potatoes with your holiday feast, take a moment to reflect on their seafaring, globetrotting ancestors.