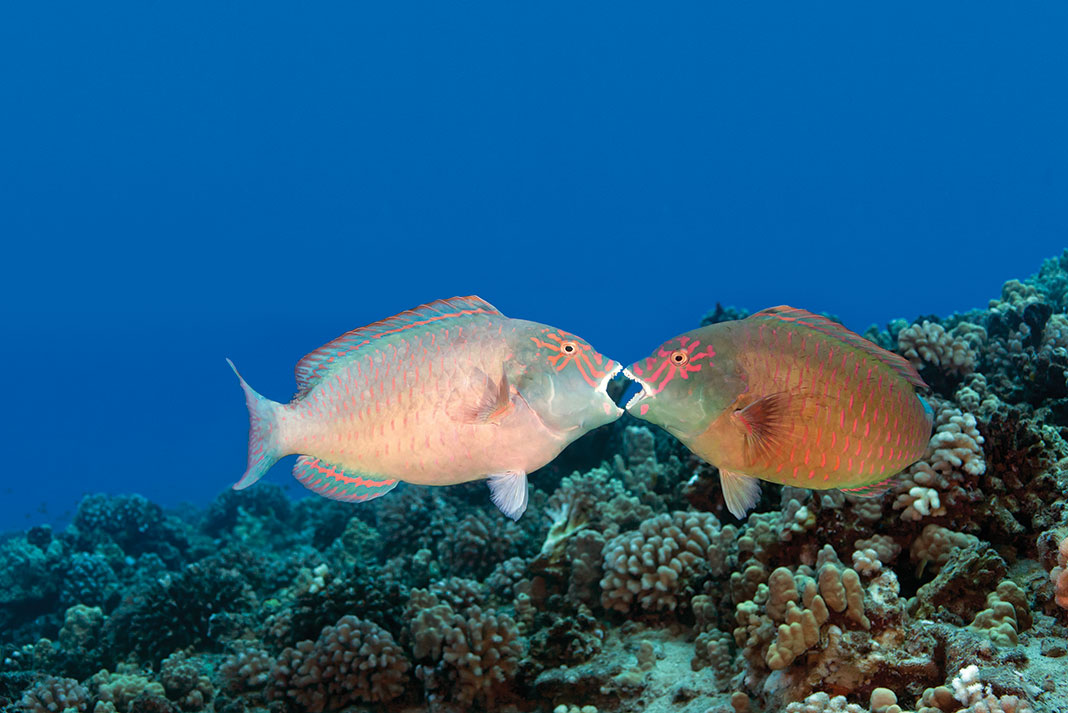 Parrotfish are strange beasts. Called uhu in Hawai‘i, these spectacularly painted reef dwellers have blunt heads and fused teeth that give them cartoonish smiles. They’re noisy eaters; you can hear them munching on coral underwater. After a snack, they expel a stream of sand — as much as a ton a year per fish! In fact, most of Hawai‘i’s white sandy beaches are actually parrotfish poop.

Seven species of uhu dwell in Hawaiian waters, including three endemics. The regal parrotfish, native to our archipelago, is fiery orange with brilliant purple fins. The stareye wears pink eye makeup that would make David Bowie proud. The bullethead is perhaps the most flamboyant of the bunch, dressed in a rainbow of psychedelic pastels.

All parrotfish start out drab. The fantastic colors emerge when female fish swap sexes and transition into males. Brightly colored and territorial, these “supermales” dominate the best spawning sites. Each supermale controls a harem of females with whom he individually spawns. When he dies, the next top ranking female in the harem changes sex and takes his place. Hawaiian fishermen in the past believed that parrotfish behavior could hint at what was happening at home. Capering and frolicking fish might mean that the men’s wives were playing around. Meanwhile, if an attractive wahine (woman) walked by, a man might comment: “Momomi wale ku‘u ‘ono i ka uhu mā‘alo i ku‘u maka.” (“My mouth waters for the parrotfish passing before my eyes.”) A slippery uhu referred to a wily person.

Which brings us to the weirdest parrotfish fact. Some uhu sleep in a cocoon made of mucus. You read that right. Before drifting off to sleep, certain parrotfish secrete a snot balloon up to three inches thick. Biologists theorize that the bubble protects slumbering fish from eels out on the prowl or parasitic crustaceans. It doesn’t prevent local fishermen from bagging the fish. Uhu are as delicious as they are unusual.