Story by Shannon Wianecki | Photography by Forest and Kim Starr 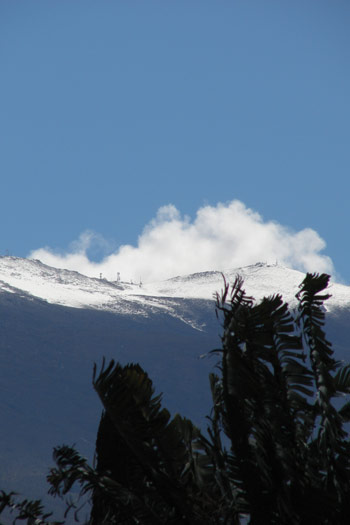 In the thick of winter, most mainlanders come to Hawai‘i to escape inclement weather. The last thing they expect to encounter on their tropical holiday is a Hawaiian snow goddess. And yet, Poliahu and her icy companions are real.

According to Hawaiian lore, Poliahu inhabits Hawai‘i’s highest peak, Mauna Kea on the Big Island. She wears a cloak of fine, white kapa (barkcloth), which she often drapes over the mountain. She and her sisters, Lilinoe, Waiau, and Kahoupokane, reportedly love sledding down Mauna Kea’s steep slopes. One day, a beautiful stranger asked to join their competition. The group shot down the mountain, sparks flying from the wooden rails of the holua (sleds). When judges declared Poliahu the winner, the stranger’s fiery temper erupted, revealing her true identity. Furious at losing, Pele, the volcano goddess, opened red-hot fissures in the earth and spewed lava. Poliahu smote the fire with snow flurries and called on her sisters Waiau and Kahoupokane to release their underground lakes. Lilinoe, goddess of mist and rain, unfurled freezing blankets of mist. Pele’s blazing lava turned black and hard as it met the massive wall of ice and snow.

This story reflects geological fact: Mauna Kea experienced at least three glacial periods, during which fire and ice fought for dominion over the mountain. Today, Poliahu blankets the 13,796-foot summit in snow from November through March.

If you’re lucky enough to witness the snow goddess spreading her glistening kapa across the volcanic ridge, be respectful. In your haste to make a Hawaiian snowball, take extra care not to trample the rare and endangered plants that have adapted to the extreme climate. You don’t want to rile the tempestuous spirits who rule this region.