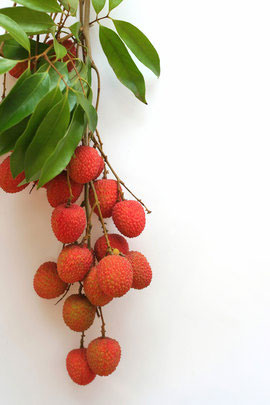 Maui is in the midst of lychee season, which spans the summer from May to August. Lychees (Litchi chinensis) are native to China, as their botanical name suggests.The perfumed fruit was so dear to a Tan Dynasty emperor that he requisitioned his fastest horses to deliver them from a distant Southern province. A single lychee tree found its way to Honolulu in 1873, the fruits of which spread across the fiftieth state and eventually the nation.

Lychee season is a fickle thing in Hawai‘i.Sometimes the trees go gangbusters,their limbs exploding with clusters of bright red fruit—sometimes not. Hawai‘i’s climate is not ideal for commercial production of lychees. The trees do best in places with hot, humid summers and cool, dry winters; Maui winters are generally too wet to produce a consistent harvest. One local theory holds that trees need to be shocked into fruiting. Some folks report that hitting a tree with a heavy chain or even gently with a car results in a flush of fruit—a real bumper crop!

Lychee fruits are fun to eat. Crack open the brittle red shell. Peel it away to reveal translucent, pearly flesh wrapped around a single, hard seed. Peeled lychees look a little like eyeballs and taste of rose petals and cinnamon. A fresh lychee has a bright red (not brown) shell and moist (not rubbery) flesh. It’s best to purchase or pick lychee with the stems attached, as their sweet fragrance and texture quickly begin to fade once separated from the tree. If you can’t bear to go without the fruits during the rest of the year, freeze them in their shells to enjoy later. You can find lychees on menus around the island, flavoring sorbets, ice creams, martinis, and even shave ice.