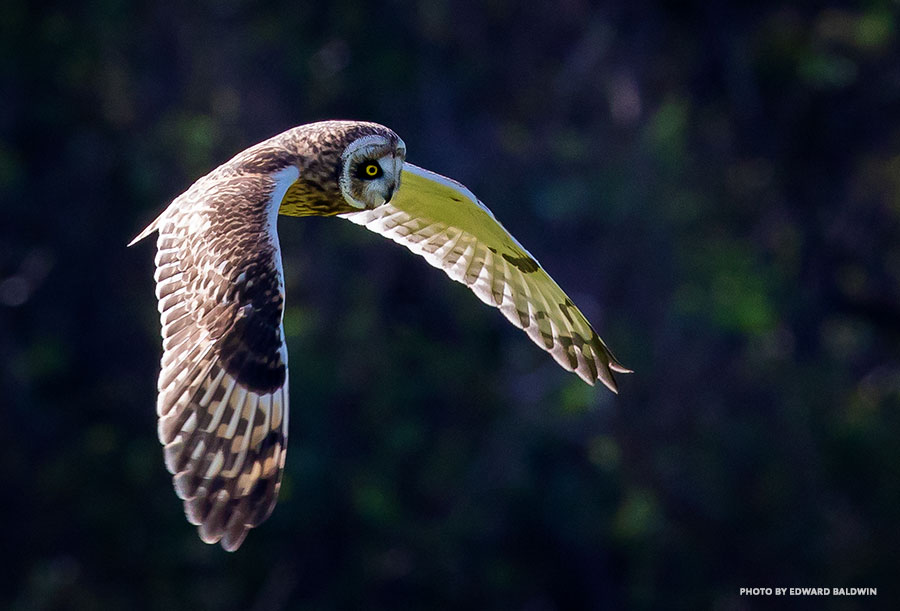 Autumn is a thrilling time for Hawaiian owls and those who admire them. Starting in November, the pueo, or short-eared Hawaiian owl, soars into the sky to dazzle prospective mates. Courting birds ﬂy loops high above their nesting grounds. Hovering, almost shuddering, they clap their wings together, twirl, and dive.

“That clapping behavior is distinctive,” says Dr. Melissa Price. The University of Hawai‘i professor studies the owls on O‘ahu, where the native birds are particularly vulnerable to habitat loss and introduced predators. Unlike most owls, pueo are diurnal. The golden-brown birds hunt by day for rodents and other small prey in wetlands and open fields. People often confuse pueo with the barn owl, an introduced species. Barn owls are nocturnal, larger than pueo, and have white, heart-shaped faces.

Pueo play important roles in many mo‘olelo (stories). The most famous of these involves Kapo‘i, a poor Honolulu man who found a nest with seven eggs while gathering pili thatching for his house. As Kapo‘i prepared to cook the eggs, an owl landed nearby and begged him to spare her children. Kapo‘i consented. The owl then instructed him to build a heiau (temple). When the king of O‘ahu learned of this unauthorized temple, he sent warriors to kill its creator. But Kapo‘i’s winged friend summoned owls from across the archipelago. They filled the sky and drove off the attackers. In a similar legend, Pueonuiokona, an owl deity from Maui, rescued two boys from a pursuing sorcerer at Keālia Pond.

Mythical or not, owls are mesmerizing. “There’s something about owls that people just feel a connection to,” says Price. “Their faces are very expressive.” Pueo are particularly charismatic during mating season. Look for courtship displays at Kanahā Pond, where three pairs are known to nest. Within the pond’s sanctuary, the ground-nesting birds are protected from feral cats and mongooses. Their adorable, goggle-eyed owlets fledge by July. Help Price collect data; report any pueo sightings at PueoProject.com.

In this rare footage captured on Oʻahu, an owl takes his courtship display to new heights. But don’t blink—it happens in a flash, about six seconds into the video.