Born was the curlew, the parent
Out came its child, a stilt, and flew

From the Hawaiian creation chant, Kumulipo, as translated by Martha Beckwith 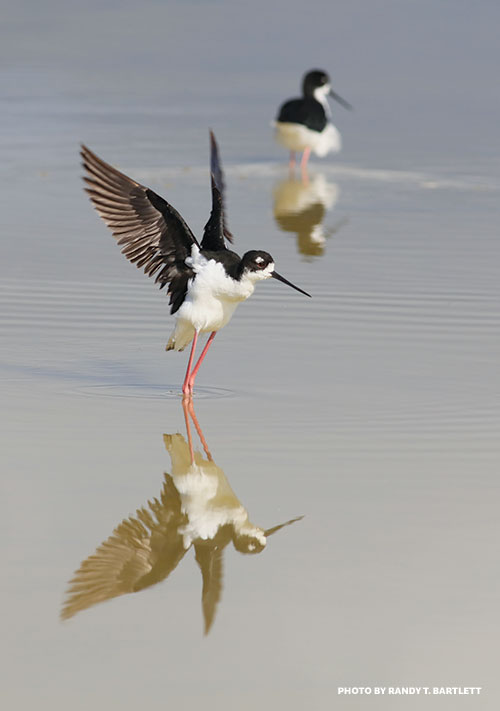 Summer is the season to look for an exceptionally photogenic shorebird: ae‘o, the Hawaiian black-necked stilt. This sleek, tuxedoed bird stalks coastal wetlands atop bright pink stilts — its namesake in both English and Hawaiian. (The word ae‘o also refers to wooden stilts that children play with, or a long-legged person.)

Dressed in formal feathers, ae‘o forage for crustaceans and small fish at the edge of tidal ponds, taro patches, and reservoirs. The lanky birds tend nests near the water from April to August. If they catch wind of an intruder, they rise into the air, circling and squawking. This shrill siren is a clue to tread lightly. While you can’t miss the noisy birds, you might not see their camouflaged eggs underfoot. Cradled within a nest of reeds and roots, the eggs look remarkably like stones — brown with black mottling. And when the chicks hatch, they have the same camo coloring.

Stilt chicks — the gift of summer — are irresistibly adorable. Balancing on extra-long legs, the wobbly fluffballs peer down at their own reflections before trying to pluck fish from the shallows. As the birds mature, you can determine their sex and age with a quick glance through a pair of binoculars. Adult females have brownish back feathers, whereas males’ back feathers are solid black. Juvenile stilts have beige legs — they don’t turn disco pink until after puberty. 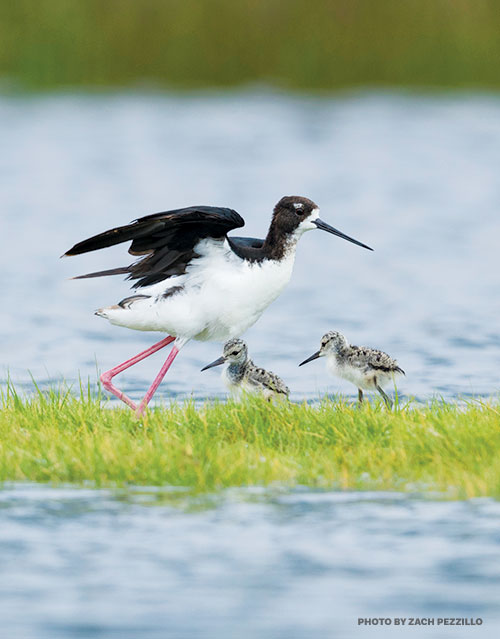 The ae‘o is one of five subspecies of black-necked stilt. Eons ago, a flock found its way to the Hawaiian Islands, became isolated from others of its kind, and evolved into a distinct subspecies. Today, the birds are on the endangered species list, threatened by wetland development and predation by feral cats and mongooses. Maui and O‘ahu account for 60 to 80 percent of the world’s ae‘o population. Fewer than 2,000 Hawaiian stilts exist, but these rare birds can be easily spotted at Kanahā Pond in Kahului and Keālia Pond in Mā‘alaea. Don’t get too close, or they’ll sound the alarm.