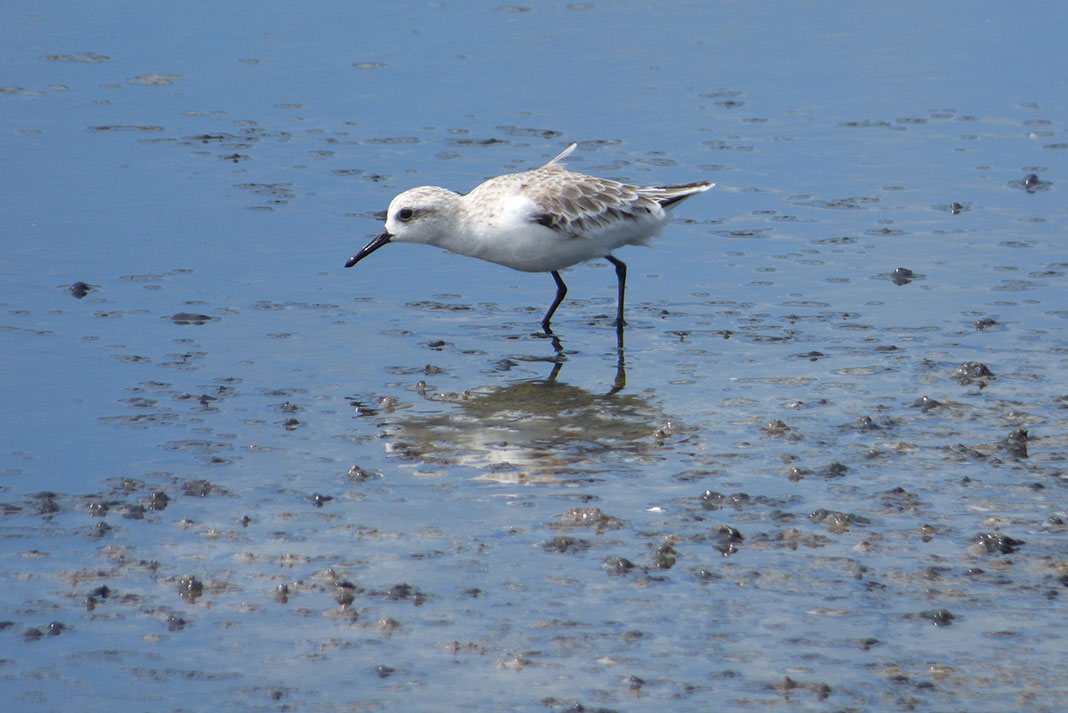 Fall signals the return of Hawai‘i’s smallest seabirds: tiny sanderlings who spend summers in the Far North and winters in the Hawaiian Islands. The seafaring species weighs around two ounces, with wings that measure just seventeen inches from tip to tip. No matter—the tireless fliers manage to migrate here from their nesting grounds in the Arctic Circle.

Once they’ve arrived, it’s easy to tell them apart from Hawai‘i’s other shorebirds: sanderlings are the only wave chasers. The plump little seabirds have pale grey wings and white bellies. They skitter along the shore on thin, dark legs. In Under the Sea Wind, the great American nature writer Rachel Carson described sanderlings as running “with a twinkle of black feet.” The wee opportunists have to be quick; they find their food in the receding tide, and race after each ebbing wave to snatch the crabs and other critters that lie exposed in the wet sand.

The pocket-sized birds aren’t so easy to spot. They’re small and fast, and their silvery feathers disappear against the sunlit glare of the sea. Walk along the water’s edge at Kanahā Beach or Keālia Pond and you might accidentally flush a flock. When startled, sanderlings take flight, flashing the dark patches of their upper wings. Flocks of sanderlings are mesmerizing to watch. The shadowy birds move back and forth in sync with the tide, rippling like the lace hem of a liquid dress. Hawaiians captured this relationship perfectly when they called the bird hunakai, or “sea foam.” The same name also refers to the white-flowered beach morning glory that unfurls vining tendrils at the high-water mark.

The global populations of sanderlings numbers around 700,000—but only a few hundred hunakai call Hawai‘i home. Sadly, the species appears to be in decline, threatened by shoreline development, oil spills, and climate change. Don’t miss an opportunity to watch the hunakai dance with the tide; they’re here from October to June.