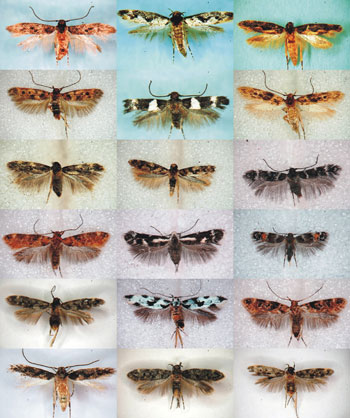 What kind of caterpillar dives under water, rappels up rocks, sports fancy camouflage, and snacks on escargot? Meet Hyposmocoma, the James Bond of the larval world.

Hyposmocoma (hy-PAHS-mo-CO-ma) is a genus of native Hawaiian moths. As winged adults, they’re “borderline spectacular,” says Daniel Rubinoff, the University of Hawai‘i professor who studies these wee beings. One has red-, orange-, and white-patterned wings. Another is   velvet blue, streaked with silver and orange. But it’s their dynamic larval stage that’s been making headlines.

One newly discovered Hyposmocoma on Maui was found devouring a Hawaiian tree snail. Later named H. mulluscivora, it is the world’s only snail-eating caterpillar. Most caterpillars content themselves with leaves and lichen; this one spins a silken web around an unsuspecting snail’s shell before climbing in to feast.

Rubinoff found his first amphibious caterpillar in Manoa Stream on O‘ahu, “right under the nose of the university.” Later searches turned up aquatic caterpillars on each island.

Hyposmocoma caterpillars are also remarkable for the cases they build to shelter themselves. Rubinoff and his colleagues have names for the various shapes: burrito, cigar, bugle, and oyster. One species scales trees for the bright yellow lichen it uses as additional camouflage.

Scientists have identified over 350 species of Hyposmocoma. Rubinoff guesses there are more than 700. The genus may be as old as 20 million years; it evolved along with the Hawaiian Archipelago itself. The moths inhabit wildly diverse landscapes—from the windswept plains of Lana‘i’s Garden of the Gods to East Maui’s spongy rainforests. “We’ve found them next to the ocean,” says Rubinoff, “and all the way up to 9,000 feet.”