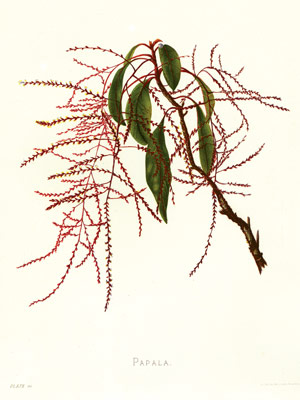 This year, why not celebrate July Fourth with something really festive: flaming papala sticks? The ancient Hawaiians loved pyrotechnic displays, too. They discovered that papala, or Charpentiera obovata, is Nature’s own Roman candle. Its soft and fibrous wood is composed of layered, vertical rings. When ignited and tossed into the air, it emits streams of sparks. Papala is an endemic Hawaiian amaranth. It grows as a shrub or small tree in mesic forests throughout the Islands. It’s best known from Kauai, where oahi (fire throwing) was a spectacular occurrence at the cliffs of Haena. Isabella Sinclair described the wonderful spectacle in 1885, in her illustrated book, Indigenous Flowers of the Hawaiians.

“On dark, moonless nights upon certain points of these awful precipices, where a stone would drop sheer into the sea, the operator takes his stand with a supply of papala sticks, and, lighting one, launches it into space. The buoyancy of the wood causes it to float in midair, rising or falling according to the force of the wind, sometimes darting far seaward, and again drifting towards the land. Firebrand follows firebrand, until, to the spectators (who enjoy the scene in canoes upon the ocean hundreds of feet below), the heavens appear ablaze with great shooting stars, rising and falling, crossing and re-crossing each other, in the most weird manner. So the display continues until the firebrands are consumed, or a lull in the wind permits them to descend slowly and gracefully to the sea.”

If you aren’t keen on pyrotechnics (or wish to preserve the rare, living shrub), the plant’s inflorescences are fiery enough without being set aflame. The delicate sprays, which bloom from May through August, range from yellowish to deep magenta. They erupt from the stems, much like a comet’s tail streaking the sky. Lei makers favor them; they provide a lovely contrast to deep green leaves in haku lei.