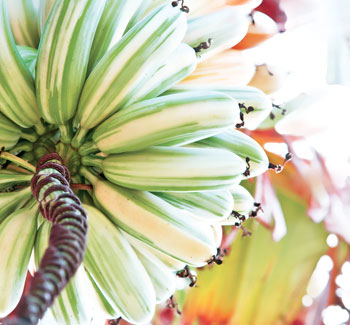 Had the first inhabitants of Hawai‘i not brought along a living pantry, they might have starved. The Islands’ native flora includes only a handful of edible plants. But the Polynesians voyagers left nothing to chance; their canoes were packed with banana, taro, and sweet-potato plants. Once settled, these master agriculturalists weren’t content to munch on the same old meal. They cultivated new varieties of their favorite fruits and vegetables—each with a different flavor, appearance, or use. By the time Westerners arrived, Hawaiians had developed at least forty-four distinct banana varieties—a pretty impressive collection for anybody raised on the standard yellow supermarket variety.

Consider the Maoli Manini; peel its green-and-white-striped fruits to reveal orange-tinted flesh—reportedly delicious when simmered in fresh coconut cream. The striking Maoli ‘ele‘ele has dark, glossy trunk tissue used for weaving patterns into lauhala mats and baskets. The male flowers of Iholena Kapua produce sweet, jellylike nectar once used to treat sick babies. The bizarre hapai (pregnant) variety is so named because its fruits grow inside its trunk!

By the time W.T. Pope, director of the Department of Agriculture’s Honolulu research station, began cataloging Hawaiian bananas in the 1920s, many varieties were rare or extinct. Today, only twenty-three remain, the majority of them found on the Valley Isle. Maui botanists and authors Angela Kay Kepler and Frank Rust are the Indiana Joneses of lost bananas. Slogging through the rainforests of Nahiku, hiring helicopters for aerial surveys, scouring marketplaces, and peering over neighbors’ fences, they’ve gone in search of the treasured fruits. Their comprehensive book on the subject, Bananas in Hawai‘i: Living Polynesian Heirlooms, is scheduled for publication in the next year or two, and has already received praise from international agricultural experts.

To appreciate the fruits of the Hawaiians’ botanical wisdom for yourself, visit the Maui Nui Botanical Garden in Kahului, where several colorful banana varieties still thrive.