Story by Shannon Wianecki | Photo by Forest and Kim Starr 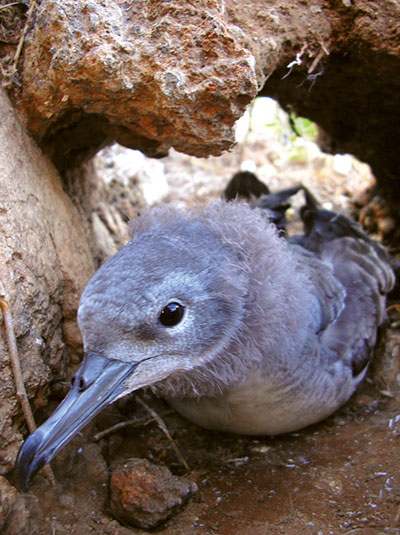 At night, along the Wailea beachwalk, a ghost baby can be heard wailing—at least, that’s what some superstitious resort staff say. It makes for a great date activity: after a fancy dinner, take a starlit stroll, and listen for the spooky cries. Sure enough, mysterious sounds can be heard along the trail—but they don’t belong to a babe in the bushes. They’re the calls of the ‘ua‘u kani, or wedge-tailed shearwaters.

These native Hawaiian birds spend the majority of their lives at sea, where they feed on baitfish and squid. They return to the Islands each spring to nest. After digging a burrow, the parents take turns incubating a single egg and later feeding their downy chick. Fledglings generally take wing by November.

With their three-foot wingspans, the seafaring ‘ua‘u kani are powerful fliers, but on land, they’ve got two left feet. They crawl, rather than walk, on thin, weak legs, and are easily disoriented by bright lights, rendering them vulnerable to attack by introduced predators. Chicks are especially helpless; their underground nests are their only protection, and loose dogs and feral cats have recently decimated entire colonies. Local volunteers responded by fencing burrow areas and restoring beach habitat. Thanks to these efforts, some populations are recovering.

Nesting season has begun for Hawai‘i’s winged noisemakers. For the wedgies’ sake, let’s keep a watchful eye on our pets—and an ear out for the birds.

(To learn about volunteer opportunities or report a stranded seabird, call the state Division of Forestry and Wildlife at 984-8100.)