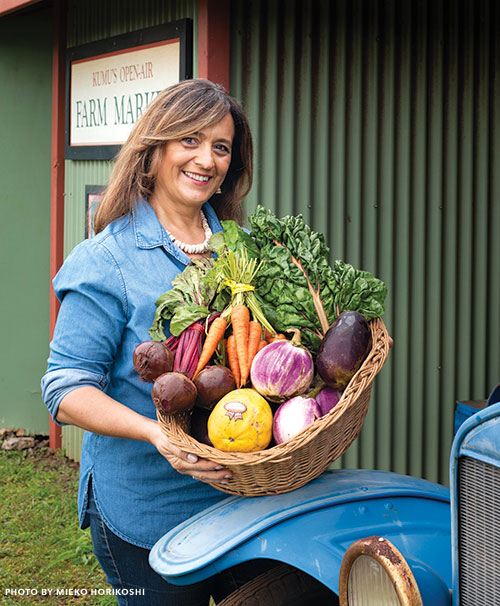 WELL-GROUNDED: Manu Vinciguerra loves making lists. In her tidy office in Kumu Farms’ cavernous packinghouse at the Maui Tropical Plantation, shelves and drawers are filled with scrawled-in notebooks—one for every month. “I have to write everything down,” Manu says. “It keeps me focused.” Perhaps that’s why she has seemingly superhuman ability to remain calm when the packinghouse fills with delivery drivers, chefs, and store managers on twice-weekly pickup days. “It’s a cross between Grand Central Station and a small Italian piazza,” Manu says. “We laugh and talk about food—it doesn’t feel like work.”

A TASTE FOR LEARNING: Born and raised in Italy’s Abruzzo  region, Manu has been cooking for as long as she can remember (she recalls making ravioli by hand by the age of three), and says her passion for fresh food is ingrained in her DNA. After earning a master’s degree in foreign languages and literature, Manu moved to Menlo Park, California, to teach college-level Italian courses, and eventually started her own language school.

SEEDS OF CHANGE: By 2006, Manu and her husband had grown weary of city life and headed west again—this time to Moloka‘i. She says the island ticked every box: a close-knit rural community by the sea. One day, on a quest to find a pound of fresh basil, she paid a visit to Kumu Farms’ nursery and packinghouse in Ho‘olehua. She quickly became a familiar face at the farm, and developed a rapport with its owner, Grant Schule, who was so impressed by her culinary repertoire and teacher’s knack for explaining things that he offered her a job in 2009.

NEW DIGS: In 2012, Manu bid farewell to Moloka‘i when Kumu Farms debuted its second location at the Maui Tropical Plantation in Waikapū; she’s been running the show there ever since. Her weekly to-do list includes overseeing the day-to-day operations of the sixty-plus-acre diversified farm, filling gift-box orders, cleaning, sorting, and counting inventory, prepping for pickup days, and inventing recipes for Kumu Farms’ packaged products (many of which include the farm’s claim-to-fame strawberry papayas). No two days are the same, and things can go unexpectedly haywire if Mother Nature intervenes. “It’s intense, interesting and challenging—and I love it,” she says. “Every day is a good day.”

FIELDING QUESTIONS: If there’s a lull at the packinghouse, Manu visits the farm stand, where she chats with customers. “My greatest joy is educating others,” she says. She often spots children puzzling over unfamiliar-looking herbs or vegetables. One time, a little boy was curiously inspecting a fennel frond; Manu seized the opportunity. “I asked him, ‘Do you like licorice?’” she recalls. Hesitantly, he sampled a piece. “His face lit up,” Manu says. “It made my day . . . it always does.”