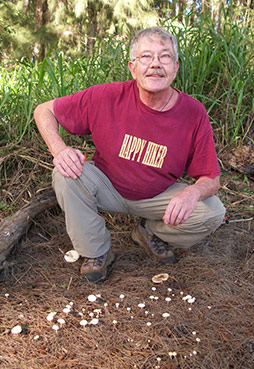 GOURMET GONE WILD: A graduate of the Culinary Institute of America, Hintz began his love affair with mushrooms in the kitchen. While working at a restaurant in San Francisco, he befriended local mycological society members, who would deliver freshly foraged mushrooms destined for the dinner table. When Hintz moved to Maui in the late eighties, his curiosity for these fungal delicacies followed. This time, he swapped his apron for a pair of hiking shoes.

WHERE THE SUN DON’T SHINE: Rainy season is prime time for finding wild mushrooms. About one week after a big rain, Hintz grabs his flashlight, knife and a mesh bag and treks into the forest. His greatest tool, however, is his mind, which packs over two decades’ worth of mushroom know-how. Like a detective on the prowl, Hintz uses environmental clues — such as damp hapu‘u ferns or piles of compost — to spot nature’s illusive gift.

GOOD NATURED: There are more than 14,000 known mushroom species in the world; Hawai‘i is home to approximately 1,200 of them. “What we have here is really miniscule compared to other parts of the world,” says Hintz. “The fortunate thing is that we have some of the most delicious.” Hintz has sold his edible treasures to some of Maui’s top restaurants, including Capische? and Spago. He notes that morel mushrooms, prized for their rich and creamy flavor, can command up to $50 per pound.

DON’T TRY THIS AT HOME: Hintz’s quest for mushrooms can be risky. He has outrun flash floods, stood head-to-head with wild boars and traversed treacherous terrain. Nothing is more dangerous, he says, than careless foraging. Because edible and poisonous mushrooms can resemble each other closely, positive identification is crucial. “You have to know what you’re eating — period,” Hintz warns, adding that he knows of three deadly mushroom varieties that grow on Maui.

EXPERT WITNESS: While mushroom hunters have a reputation for being secretive, Hintz is eager to lend his expertise, fielding emails and calls from friends hoping to identify their finds. He has also contributed his discoveries to Don Hemmes’s popular field reference, Mushrooms of Hawai‘i: An Identification Guide. Several years ago, a family rushed to the emergency room after their young son accidentally ate a mushroom from their backyard. Hintz was called in to identify the variety, which turned out to be harmless.

PRIMAL INSTINCTS: For Hintz, mushrooming is an intimate relationship with the environment, of knowing when the right weather pattern and combination of moisture, soil and tree types will align for a full bag. It’s also the primal thrill of the hunt. “There’s a part of the brain that is rewarded in hunting and gathering,” he says. “It’s no different than a gold miner finding a nugget.”