On a scale of one to ten, Madeline the Mermaid has to be the nicest half-girl/half-fish we’ve had the pleasure to interview. When in season (spring break, summer and Christmas vacations), Madeline visits the Grand Wailea’s Activity Pool, a 770,000-gallon playground of slides, waterfalls, caves and pools. While there, she swims, plays and chats with youngsters until the lure of salt water draws her back out to sea.

WHAT THE JOB ENTAILS: “I swim out from under the waterfall, introduce myself, and ask the children where they come from. I am very intentional about remembering their names; it makes it magical for them. We swim underwater, take pictures . . . some girls and boys stay with me the whole time I’m there.” 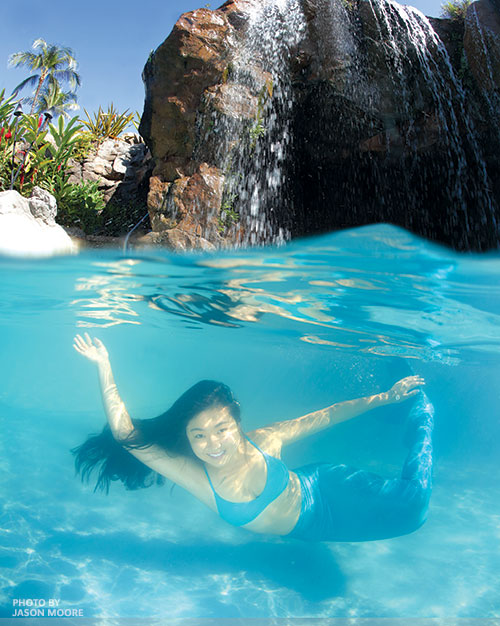 YOU GO, GILLFRIEND! Her job as official mermaid is more than just fun and games. “I consider myself a professional encourager,” Madeline says. “Kids open up to me and tell me their fears. I show them that the water isn’t something to be afraid of. One little boy was afraid to jump from the Tarzan swing into the pool. I swam with him and encouraged him, and he jumped!

“I’m not a marine expert, but I share my ocean experiences: the best places to find turtles, what time of year to see whales. I also make the children aware of safety rules, and if I see dangerous behavior, I guide them to different activities.”

HOW DID SHE LAND THE POSITION? “I visited the Grand Wailea in 2014, jumped right into a photo shoot that was happening, and met Yvonne. She gave me the job.” (Madeline is the hotel’s first, and so far only, mermaid on staff.)

“What we look for in a mermaid is someone who can engage with children of all ages,” says Yvonne Biegel, Grand Wailea’s director of marketing. With Madeline, they waived an audition. “Children are very honest and ask interesting questions — and Madeline has never faltered.”

FISH STORIES: What’s the biggest misconception humans have about mermaids? “Kids ask whether I kill and eat pirates,” Madeline says sadly. “I don’t. Any pirate can be my friend.” She suspects the rumor began with movies that in recent years have depicted sirens — those fin fatales of the sea — as mermaids. Not true, she insists, adding that even when she’s at the Grand Wailea, with its award-winning restaurants, her diet consists purely of seaweed.

What’s the biggest misconception mermaids have about humans? “A lot of mermaids are afraid of humans. We’re very shy; that’s why you hardly ever see us.”

Her own ease with people probably derives from her mixed heritage. “My family is full of humans,” she explains, leading us to wonder whether any of them might be Finnish. Then she surprises us by saying, “I only became a mermaid two years ago, when I came here. I always had that potential. The Grand Wailea brought out the magic.” 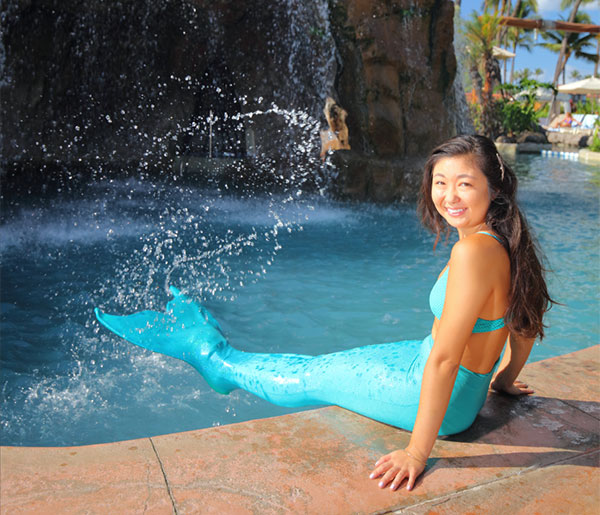 A ROLE MODEL FOR SMALL FRY: “Mermaids are miracles,” Madeline notes, so she understands why youngsters want to emulate her. “The Grand Wailea’s children’s store has tails for purchase, and if a girl wants to be a mermaid, I’ll teach her how to swim with a tail. It’s a core workout, a dolphin kick that uses the whole body. I teach boys, too; their tails have shark fins.

“One mom and dad told me their little girl’s dream was to be handed a tail by a real mermaid.” Madeline presented the four-year-old with a tail of her own, and was moved by the parents’ tears at seeing the little girl’s delight.

“The kids are the reason I come back,” she says. “I appreciate the smiles on their faces, the joy I’m able to bring. I tell the kids, when they receive a tail, ‘Once you’re a mermaid, you always are.’”

When not on duty, the Grand Wailea’s mermaid enjoys traveling incognito as Madeline Hamada. She also attends (what else?) school.