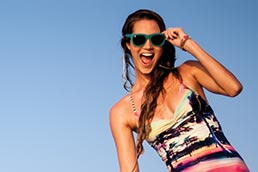 DREAM JOB: As one of Roxy’s freshest faces, Monyca Eleogram traverses the world, representing the surf brand as her passport fills with stamps from such far-flung locales as Indonesia, Mexico and Australia. “A Roxy girl is someone who wants to have fun, dares herself and is open for adventure,” Monyca explains. Whether she’s chasing waves or smiling for the camera, this twenty-three-year-old is certainly embracing that lifestyle.

MAKING WAVES: Monyca’s portrayal of the ultimate surfer girl is no act. Raised in remote Hana, on Maui’s east side, she started surfing when she was just six years old, and began entering contests at age eleven. She later represented Hawai‘i at the 2005 and 2006 Quiksilver World Junior Pro competition and qualified for the 2007 National Scholastic Surfing Association National Finals. She says there’s a misconception that Roxy girls are models who can’t surf. “That’s absolutely not true,” says Monyca. “All of us have huge surfing backgrounds.” 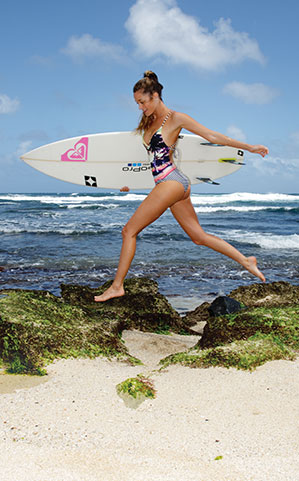 PICTURE PERFECT: Then there are the perks — like a closet full of Roxy clothing and first dibs on the season’s newest styles. Monyca says her favorite part of the job is going on surf trips. “You go down to Mexico, surf perfect waves for a week, and all you’re trying to do is get photos. That’s the part where I’m really living the dream.”DAWN PATROL: For Monyca, model life means 3:45 a.m. wakeup calls and twelve-plus-hour days, but, she says, “I would never want to focus on the challenges of my job because people would be laughing.” She admits that being away from her husband — pro surfer Ola Eleogram — is tough. “The longest I’ve been away from home is twenty-five days, and that’s by far the hardest part of my job.”

CELEB SIGHTINGS: Last summer, fashion icon Diane von Furstenberg teamed with Roxy to create a swimwear line. Monyca was flown to New York City for the collection’s launch party, walked the red carpet and rubbed elbows with celebrities, including Vanessa Hudgens and Furstenberg herself. Despite her glamorous encounters, Monyca stays true to her surfing roots. “The coolest people for me to meet are pro surfers. I’m so excited to work with Lisa Andersen [four-time world surfing champion] on a regular basis because she’s somebody I looked up to, growing up.”