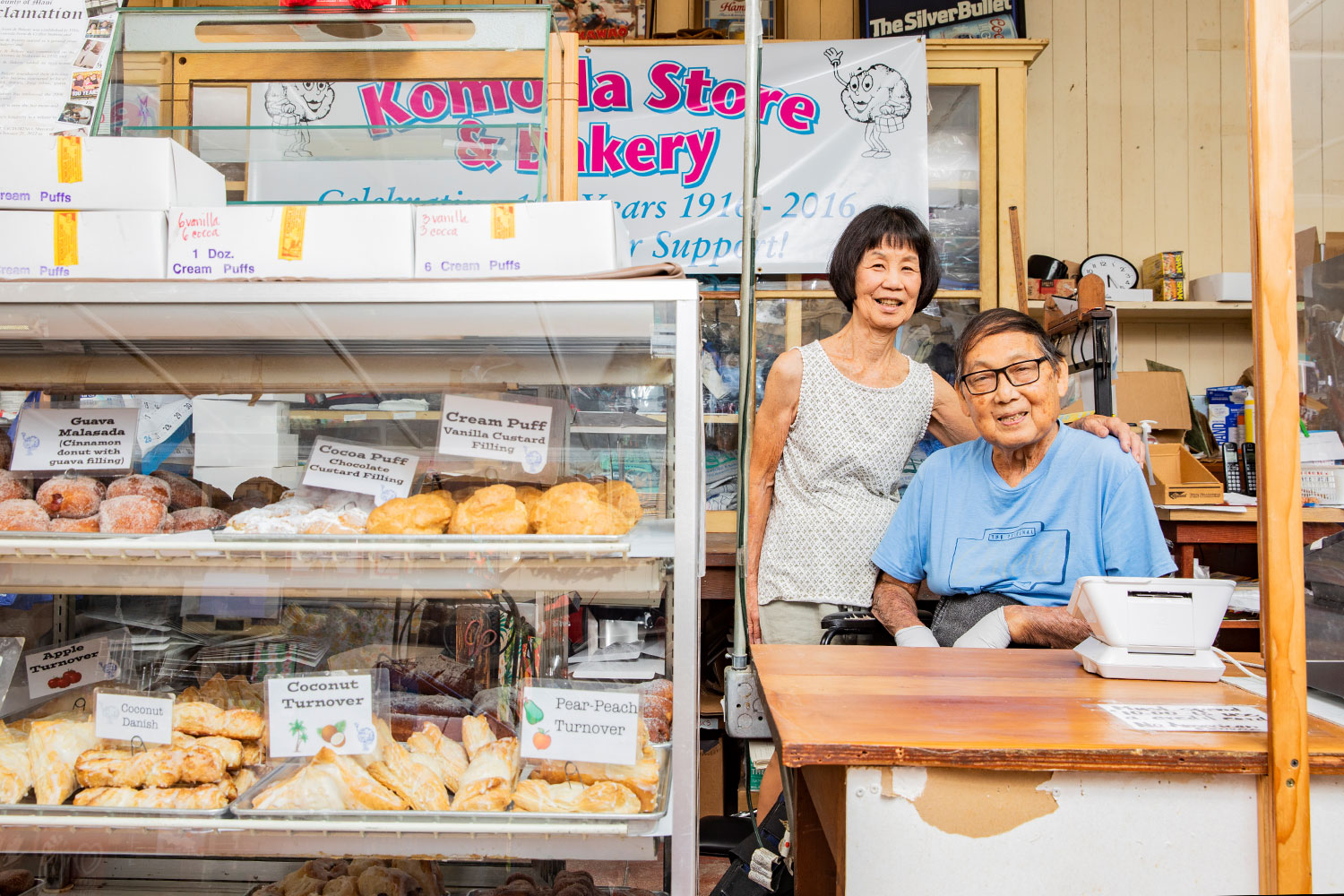 In the heart of Makawao Town, there’s a shop that has survived five wars, 19 presidents and a global pandemic. For decades, it has opened at 7 a.m., five days per week, and even though you won’t find it on the internet or social media — and the storefront is unmarked — after 105 years, Komoda Store and Bakery shows no sign of slowing down.

In 1916, Takezo Komoda and his wife, Shigeri, opened the first iteration of the enterprise, Komoda Store and Coffee Station, in the building where Polli’s Mexican Restaurant is today. Takezo had come to Maui to work on the sugar plantations, but, according to his granddaughter Betty Shibuya, he didn’t like the heat, and was much happier selling saimin, coffee and sandwiches out of his Upcountry store.

In the 1940s, Komoda’s relocated to its current location at 3674 Baldwin Avenue and expanded the business to accommodate the local paniolo (cowboys) and plantation workers. “Since it was the only store in this area, we also sold nails, clothes, horseshoes, chicken feed and kerosene,” says Shibuya. “I remember that the cowboys would come right up to the store on their horses.”

In 1947, soon after returning from World War II, Takezo’s son Ikuo went to baking school in Minnesota under the G.I. Bill. Upon his return, the store expanded its offerings to include Chantilly cakes, pies, butter rolls, cream puffs and their now-famous stick donuts. “In the beginning, people only wanted the [typical] donut and we had all these donut balls floating around in the oil,” says Shibuya. “So my uncle decided to put them on a stick and sell them like that. Now hardly anybody wants the [regular] ones!”

In 1990, Shibuya’s husband, Calvin, retired from the Air Force and learned the business from Ikuo. The Shibuyas still run Komoda’s today, and are looking to the next generation to take over so they can retire.

Though they don’t take phone orders and remain staunchly analog in a digital world, the family likes it that way. The inside of the shop is dim and old-school, and the glass display cases that once housed nails, clothing and housewares are now filled with memorabilia. Workers still begin their shifts at 10 p.m. and spend all night creating baked goods by hand, including 400 cream puffs — which are still made with Ikuo’s original recipe — and 200 malasadas. And as they have for years, customers still arrive early, before the store even opens, and patiently wait in line to snag their favorite treats before they sell out, which they always do.

Komoda’s is such an institution that in 2022, Mayor Mike Victorino declared January 21 Komoda Store and Bakery Day. So if you’re taking a trip Upcountry, leave a little earlier and stop by this iconic store to sample the treats that have been sweetening our lives for more than a century.