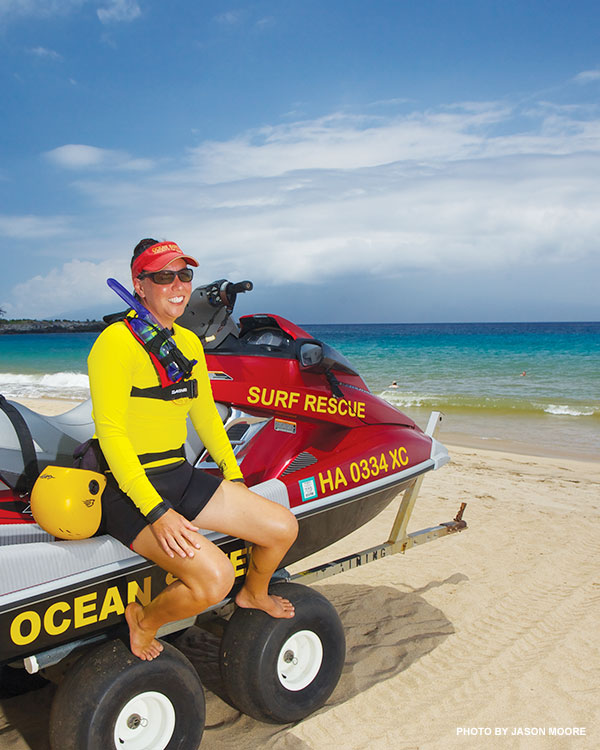 GOING WITH THE FLOW: Tamara smiles when I ask what her typical workday is like. The short answer: no such thing. Sometimes it’s racing to a struggling snorkeler or retrieving a swimmer being yanked to sea by a rip current. Other times it’s treating jellyfish stings or educating beachgoers about unseen dangers.

“What I like most about working at the beach is our interaction with the weather and how dramatically the conditions affect our day,” says Tamara, who is stationed at D.T. Fleming Beach Park in Kapalua. “I’ve worked at this beach for years, but I know that I still haven’t experienced the entire range of conditions.”

BEACH BODY: The duties of the department are as varied as the elements, and include keeping watch from lookout towers, responding via jet skis and preventing accidents.

When your body is your most important tool of the trade, injuries are bound to happen, even for the most experienced lifeguards. For Tamara, who has been an ocean safety officer since 1997, meant two broken knuckles, a torn anterior cruciate ligament (ACL) in her knee, and a sprained ankle.

“We’re going out almost daily for these SUP calls, just collecting people nonstop. It’s a bit of an epidemic.”

LOST AND FOUND: During one training session, the instructor outfitted a manikin with weight belts and dropped it into an ocean current. Due to poor visibility, the lifeguards spent nearly the entire day searching for the manikin, but no luck.

“A couple weeks later, when the water cleared up, my partner and I noticed something strange in the shore break,” recalls Tamara. “Before I know it he runs off the tower, kicks off his slippers and jumps in. He comes out holding the arm of the manikin, yelling ‘I found it!’ Everyone on the beach was confused and we were just cracking up.”

SEA STARS: Tamara has been training prospective lifeguards through Hawai‘i’s Junior Lifeguard program for more than a decade. Like a proud mama, she shares stories of rescues by former students who stepped in when nobody else could. “Someone is alive because of what these people learned in Junior Lifeguard,” she says. “The more kids we’re able to teach about ocean safety, the more lifeguards we have out and about everywhere.”