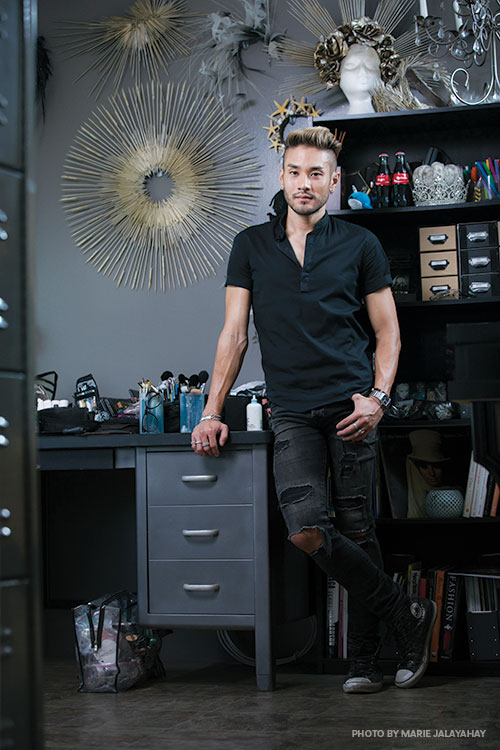 HAPPY MEDIUMS: One day he’s applying foundation on a model at a Nike photo shoot; the next, he’s affixing sideburns to an Elvis impersonator; and the third, he’s at Krispy Kreme, ordering two-dozen donuts for a headpiece he’s creating.

Ask Ry-n for his official title, and be prepared for a long answer.

He settles on defining himself as an — “I was always interested in the beauty industry. Makeup is the medium that I fell in love with . . . from there it branched out. Also, I’m a control freak, so I like to have my hands on every part of the project.”

In many ways, Ry-n is also a storyteller. “My creative process begins with a theme and I’m inspired by the story we’re trying to share. With a photo shoot, the model is my blank canvas and I can do whatever I want within the parameters of that theme.”

ABOUT FACE: The Maui native recalls some of the earliest career advice he received.

“People were saying, ‘You have to move to L.A. or New York; there’s nothing for you here,’” Ry-n shrugs.

But after a short stint in Los Angeles, he packed up his bags and returned to Maui, more determined than ever to prove he could have a successful career here. Today Ry-n works with everyone from brides to celebrity clients, all from the comfort of his hometown.

“I’d rather be based on Maui and be around family and my support group. I can always fly wherever I’m needed for work,” he says.

Web Exclusive Video: Step up your makeup game with help from the pro. Ry-n shares easy steps for recreating a shimmery, smokey eye look at home.

INTO THE WILD: Ry-n admits that being a creative in the middle of the Pacific Ocean has its limitations.

“If I want a prop for a photo shoot, I can’t go to a costume store and rent it—I need to make it from scratch.”

Like the time he went diving for urchin spines to use in an ocean-themed crown. Another project had him supergluing barbecue skewers to create a Renaissance-inspired headpiece.

“It’s a challenge,” he says, “but I like doing it that way because it makes me think and keeps me on my toes.”