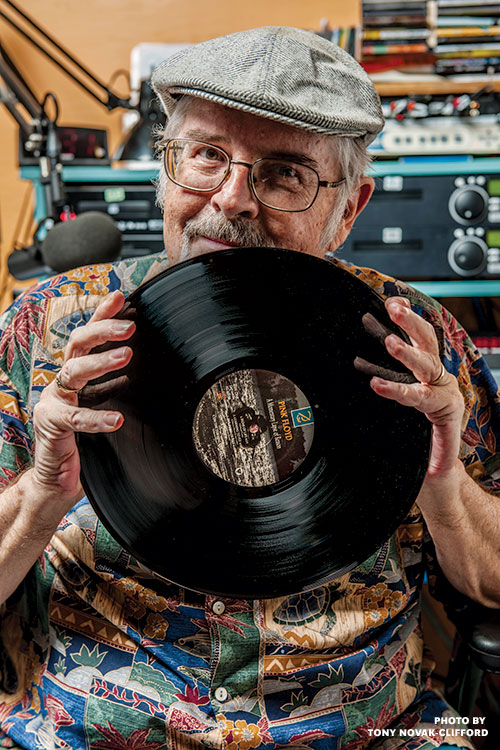 BEST WORKS: Radio personalities can walk through the world undetected; listeners can only guess what they look like. Bill Best, a beloved on-air Maui voice, likes it that way. A listener once imagined Bill looks like George Clooney. (He doesn’t, but never contradict a listener.) His reality is humble: a closet, a microphone, three walls of alphabetized CDs, and a sign that says, “REMAIN CLAM.” Such is the glamor of Mana‘o Radio, the commercial-free station Bill has anchored from its beginning in 2002. For years he did five live shows a week, improvising from quickly picked musical sets, answering the phone, and organizing public-service announcements, all while chuckling cheerfully. Once he yearned out loud for a chocolate malt. Ten minutes later, a listener knocked on the door with a frosty shake.

BEST CONVERSATIONS: Two days a week, Bill takes a break from Mana‘o to host “Off the Record,” a talk-radio show he launched on KAKU, the radio outreach of community-access AKAKU television. Radio is driven by the clock, and veteran voices develop a necessary nonchalance: Twenty seconds? No problem. Bill admits that unscripted, hour-long conversations at first left him “drenched in sweat.” Now, over 350 shows in, he and Maui callers have discussed farming, sand mining, theater, rape, politics, poetry. . . . “No subject is off the table.”

BEST MIX: His background is equally eclectic. Bill Best (his actual name) is a native San Franciscan who was in his twenties when Haight-Ashbury went Technicolor. He rode in a flower-covered bus with the One World Family Commune, helped run a garden restaurant and a hand-painted-clothing store (Faroutfits), did improv and community theater, and worked in radio and video production back in pre-tech days. He’s avuncular and easygoing, a seventy-three-year-old child of the Love Generation.

BEST AT REST: After work, Bill and wife Bobbie scoot off to Nei Gong class, which he calls “a soft-style martial art that I can do in my La–Z-Boy.” He’s partial to videogames, whose graphics, he says, “are astounding.” DJ see, DJ do: Bill paints and does collages. His pieces have appeared in Art Maui and the Schaefer Portrait Challenge, and in exhibits at Hui No‘eau Visual Arts Center.

BEST-KEPT SECRET: On Tuesday and Thursday nights, Bill performs in the best two-hour concert you will never experience—Bobbie Dee and The Stereotypes. These are friends who could go commercial, but play for the love of it in a remote Ha‘ikū barn. Bill drums. Bobbie drives the vocals with Mavis Staples octane. Then Bill sings, channeling Fred Neil: “I only know that peace will come, when all the hate is gone.” The Best voice rises sonorously into the thick Ha‘ikū starlight.