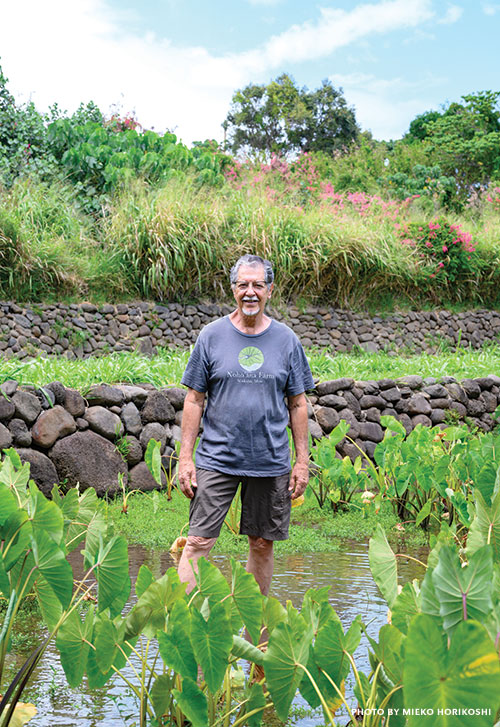 YOU ARE WHAT YOU EAT: It only takes one conversation with Victor Pellegrino to reveal his multifaceted nature. And it only takes one visit to Noho‘ana Farm, his family’s two-acre, stream-front property in Waikapū, to understand what makes him tick. Here, Victor lovingly tends to a patchwork of organic crops. Among them: ‘ulu (breadfruit) that he grinds into flour for gnocchi; fragrant rosemary for homemade pasta sauce; and seven varieties of succulent tomatoes. Victor takes food seriously: Apart from pleasing his health-conscious palate, it connects him to his Italian roots. “If you want to know who I am, ask me about what I eat,” he says.

CULTIVATING KNOWLEDGE: Long before he became a full-fledged farmer, Victor nurtured a love of reading and writing in the classroom. In 1967, after teaching stints in California and his hometown of Niagara Falls, New York, he was offered an instructorship at Maui Community College, now the University of Hawai‘i Maui College. It was a homecoming for his Maui-born-and-raised wife, Wallette (the couple met in graduate school at Marquette University in Wisconsin). In the years that followed, he taught a bevy of literature and writing courses, and chaired the college’s language-arts division. When Victor retired in 1995, he was named professor emeritus of English.

FIELD GUIDE: Victor now churns out teachable moments on the farm. With his son, Hōkūao, he delights in showing visitors how to plant, harvest, and prepare food (including kalo; more than forty varieties grow here) as part of Noho‘ana Farm’s experiential education program.

TRACING HIS ROOTS: When he’s not teaching visitors about what grows at the farm, Victor is digging into the past. Not long after retiring, he plunged into his family’s genealogy. In 2002, he flew to Italy for the first time and tracked down some long-lost relatives; he’s made several trips since then to continue his ancestry research (and to expand his culinary repertoire).

EVERY PLOT HAS MEANING: Victor has authored fourteen books, three of them poetry. His most recent work, Poems from a Farmer, includes odes to many of the living things at Noho‘ana Farm, from a towering coconut tree, to an affable goat, to weeds sprouting in the garden. Victor penned his first poem in 1959, and sixty years later, remains inspired by the world around him. “When I write poetry, I wish to share with readers my feelings and ideas about the environment,” he explains. “Very simply, through poetry, I want to reconnect them to nature—particularly to land, water, air—and to themselves. I want to share through ‘word paintings’ both the beauty and wonder of nature, but also her fragility.”

Poems from a Farmer is available at Hale Ho‘ike‘ike and Native Intelligence in Wailuku, Kumu Farms at Maui Tropical Plantation, and from the author at Italiano@hawaii.rr.com.

Enter to win a prize from an Aipono-winning restaurant!