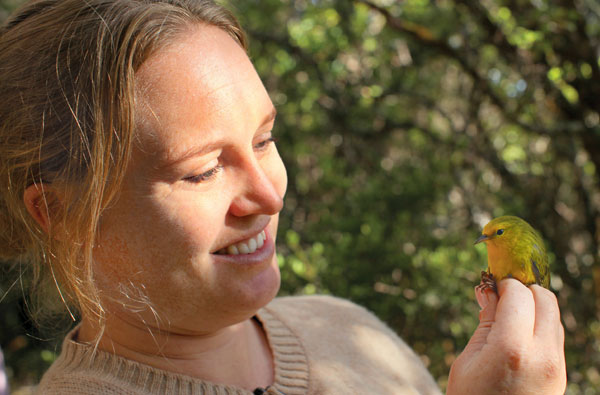 WHAT SHE DOES: Mounce’s mission is straightforward: prevent extinction of the island’s endangered native birds. Her job entails everything from designing research strategies and organizing volunteers to sloshing through remote rainforests to study avian behavior.

The organization is currently working to protect the rarest of them all, the kiwikiu (Maui parrotbill). This stocky honeycreeper, characterized by its parrotlike bill and brilliant yellow feathers, is found exclusively along Haleakala’s windward slopes. Scientists estimate there are around 500 left in the wild.

“We think of extinction as dinosaurs and things that happened long ago, but we lost a bird [po‘ouli,Hawaiian honeycreeper] on Maui in 2004. Extinction in Hawai‘i is a very current issue,” says Mounce.

ROUGH COMMUTE: To study the kiwikiu, Mounce and her team travel to parts of Maui so isolated, the only way in is by helicopter or foot. “The logistics of access and figuring out how people can work and survive in those areas is a challenge,” she says. “Our Hanawi site is a ten-hour hike one way. We camp for ten days, then hike ten miles out.”

BANDING TOGETHER: Once on site, the team employs a mist net to catch the birds in flight, then bands and releases them — a tricky task given the challenging workspace.

“Most of the forest we work within is on a 40 percent grade, so it’s really steep and really dense. It’s also raining a heck of a lot,” Mounce adds. “We’re trying to spot the birds through binoculars with constant mist and rain [in] an unforgiving environment. If we have a team of eight people out there for a week, we might band one kiwikiu.”

URGENT CARE: To survive, the kiwikiu need another home. The next step is to reintroduce the birds to a 420-acre parcel of fenced land along Haleakala’s leeward slopes, where native trees have been planted to create new habitat. With so few kiwikiu left, Mounce is keenly aware of the project’s urgency.

“When you only have 500 individuals, that’s not very many to face any new threats that come in. A hurricane could take out half of those individuals.”

CIVIC MINDED: Dealing with sensitive wildlife and extreme terrain is just part of Mounce’s job. She must also vie for the public’s attention.

“The average person doesn’t even know that what we’re trying to save exists,” she says. “Once you get them to see that Maui has these rare and endemic birds, people are going to want to protect them. You just have to show them that it’s there.”