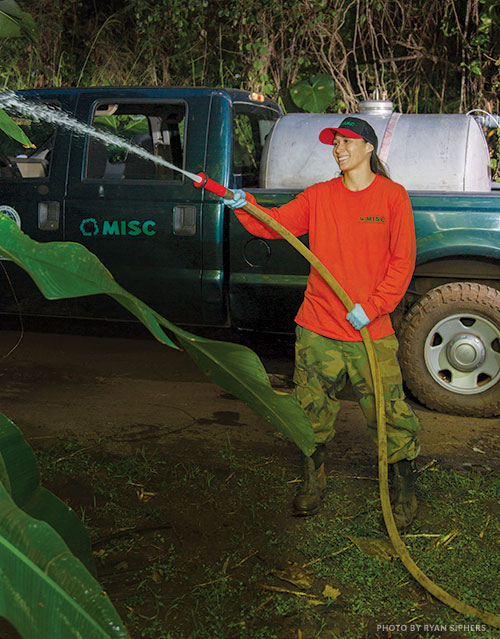 ENDANGERING SPECIES: Several nights a week, Aja Akuna goes hunting. Donning a headlamp and equipped with a sprayer and 1,000 gallons of citric acid mixture, she combs through the darkness in search of public enemy number one: the illusive and invasive coqui frog.

This teeny amphibian has overwhelmed large swathes of the Big Island, threatening fragile ecosystems by gorging on insects that are food for many native birds. The frogs are also a potential food source if (some say when) brown tree snakes are accidentally introduced to Hawai‘i. Plus, they’re downright annoying. A single male frog can emit an eighty- to ninety-decibel shriek, roughly as loud as a blender or garbage disposal.

Akuna’s five-person team is tasked with controlling Maui’s coqui frog population, mostly in Māliko Gulch on Maui’s north shore.  “It’s so loud down there that you’ll get a headache — you can’t escape it,” Akuna says.

KILLING THEM SOFTLY: The team uses high-pressure hoses to douse the landscape with citric acid, a common food additive that the EPA deems safe for environmental use. For more targeted sweeps, there are handheld and backpack sprayers. “Sometimes we’re working at manicured mansions to get rid of a few frogs; other times we’re in a gulch packed with strawberry guava, cane grass, and all kinds of other stuff you don’t want to be going through,” says Akuna, adding that rough terrain means that the crew must forge a path with chainsaws and machetes to reach their target.

The frogs have no natural predator in the Islands, and a single female can produce up to seventy-five eggs every two or three months.

“It’s a physical job, but the mental part is even tougher,” Akuna says. “We’ve worked in areas where it seems like we’ve gotten the frogs under control, only to come back later and have it sound just like it did before.”

CRITICAL MASS: While the Māliko Gulch area is the greatest threat, Akuna and her team have been following the tiny croaker across the island.

“We’ve cleared areas from Nāpili to Hāna and everywhere between. If it wasn’t for MISC, there would be frogs everywhere,” she says, before offering a warning: “We’re at a critical point right now where we really need to take control of the situation, but I’m hopeful. I wouldn’t be here if I didn’t think we were making a difference.”