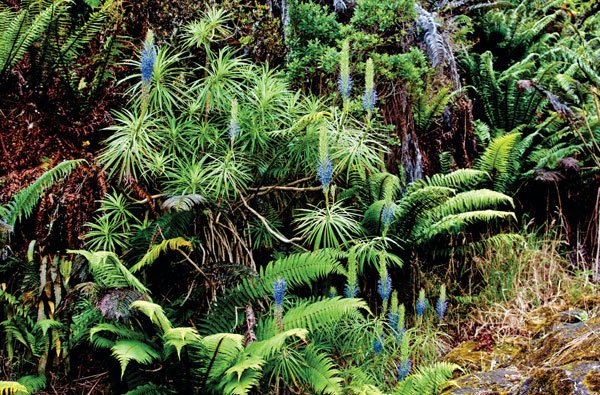 Thirteen million years ago, a bellflower seed landed on fertile ground somewhere in the North Pacific. The main Hawaiian Islands had yet to be born; the coral-ringed atolls now known as the French Frigate Shoals were then tall volcanic mountains covered in forest. On such a mountain the wayfaring seed germinated. Over hundreds of thousands of years, its descendants evolved into 124 distinct species — each occupying a different ecological niche. As their ancient home eroded, the floral pioneers marched eastward, colonizing new volcanoes as they emerged. Some of the plants became thorny, shade-loving shrubs; others grew into spindly trees. Most produced cascades of stunning flowers perfectly engineered to attract Hawaiian honeycreepers and hawkmoths. The Hawaiian lobeliads, as these wondrous plants came to be called, represent one of the world’s showiest examples of evolutionary splendor.

Unfortunately, these forest gems aren’t so easy to find in modern Hawai‘i. Feral pigs, goats, and deer have nibbled and trampled them to near extinction. Their floral pageantry is now restricted to remote bogs and steep gulches. But one of these beauties can be easily gawked at on Maui. Lobelia grayana is visible from a popular hiking trail in the Waikamoi Preserve. Its green pom-pom leaves hang over a creek bed. When it blooms in late summer, profusions of lavender flowers, tightly curled at the tips, shoot up like Roman candles. The scarlet i‘iwi regularly visits these blossoms, dipping its sickle-shaped beak in for the nectar. The bird and the bloom are a perfect match.

Ancient Hawaiians called this plant  ‘opelu, comparing its leaves to slender fish of the same name. When wind rustles the foliage, it resembles a school of fish swimming in unison.

To see this magic for yourself, join a guided hike between August and October. The Nature Conservancy’s Waikamoi Preserve can be accessed from Hosmer’s Grove inside Haleakala National Park. Park staff leads free hikes along the Bird Loop, where Lobelia grayana thrives. (808) 572-4400; www.nps.gov/hale