UP CLOSE AND PERSONAL: While snorkeling and free diving to depths of more than 90 feet, Charles “Flip” Nicklin has engaged with twenty-eight species of whales, dolphins and porpoises. But one encounter stands fins and tails above the rest: coming eye-to-eye with a male humpback.

Nicklin was snorkeling in the waters between Lāna‘i and Kaho‘olawe when the whale first circled then swam straight toward him. “He trapped me between his pectoral fin and the surface,” says Nicklin. “But it was slow and easy, and he held me there for a bit, just to have a look at me. Then he dropped his fin and swam off.”

Amazingly, Nicklin had filmed the entire event, and that footage became episode 7 of his weekly talk story series about humpback whales and the history of whale research called the Humpback Chronicles. With more than 30 episodes to date and counting, this series has allowed Nicklin to share the wonder and beauty of his beloved whales with the world.

PASSION PROJECT:
Nicklin grew up working at his father’s dive shop in San Diego and was helping to teach diving classes at fourteen years old. Nicklin Sr. was also an underwater cinematographer, so it would seem a natural segue for Flip to follow in his dad’s swim fins — but it almost didn’t happen. “It looked interesting but didn’t seem [like a] realistic occupation,” Nicklin recalls.

In 1976, Nicklin met National Geographic photographers Bates Littlehales and Jonathan Blair, and was offered a job as an assistant on a diving expedition. “I bought an underwater camera system and spent three months working in the Northwest Hawaiian Islands chain, watching the photographers work,” he says. A couple of the photos he took during that job were published in National Geographic, and in 1982, Nat Geo ran Nicklin’s very first story on Maui’s humpback whales. He has since published several books of marine photography as well as a book for kids called Face to Face With Dolphins.

Nicklin’s passion for whales is evident not only in his photographs, but also through Whale Trust Maui, a nonprofit which he cofounded with scientists Meagan Jones, Ph.D., and Jim Darling, Ph.D. Their mission is equal parts research and education, with the goal of encouraging marine conservation. Nicklin is part of the Whale Trust research-photography team, and along with videographer Jason Sturgis, works to document the behavioral and social patterns of Hawaiian humpback whales, one of the least-understood areas of whale research. Their work is key to the understanding of whale song, relationships and more. 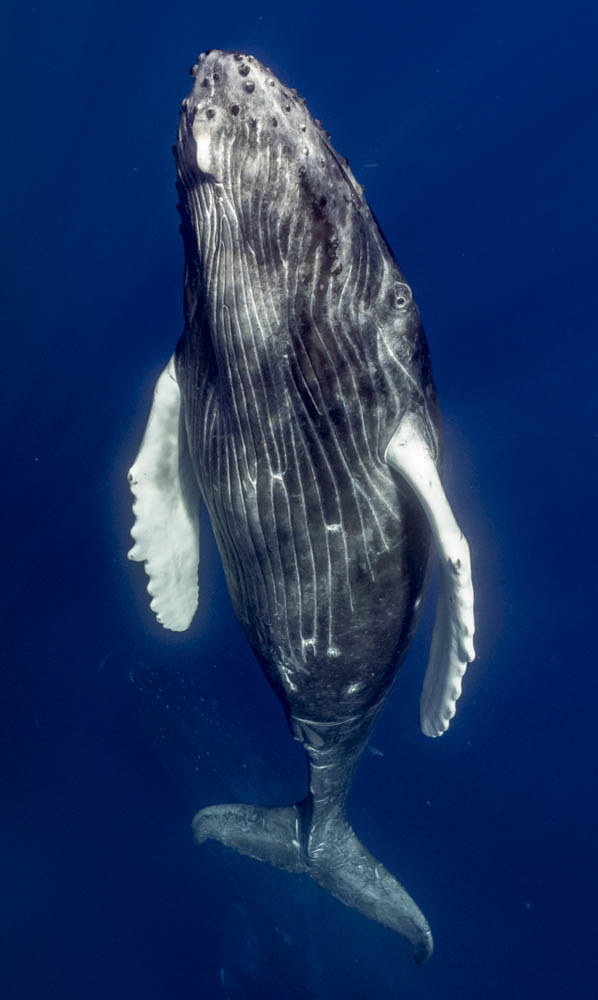 MAKE IT SNAPPY : Preparing for a photo shoot requires careful planning, and since your subjects aren’t privy to the call time, you have to be ready to jump into the water when opportunity strikes. The goal of each whale encounter is to capture as many images and as much video footage as possible without disturbing the whales or changing their behavior. For that reason, Nicklin works tank-free.

“When I am snorkeling and free diving I am making less noise than if I were SCUBA diving,” he says. “That way I can capture better behavior.”

Federal law prohibits anyone — whether on or in the water — from coming within 100 yards of a humpback, however there are permits allowed for research and education, and it’s with those in hand that Nicklin and his team conduct their studies. “It’s not [about] swimming with whales,” he says. “It’s [about telling] the story

In 2021, Whale Tales will be a virtual experience that will bring humpback whales and
the beauty of Maui to you — no matter where in the world you are this winter! This
event has raised more than $725,000 for whale research over the last 13 years, and has
reached tens of thousands of people, including thousands of local schoolchildren. For
more information or to donate to this local nonprofit, go to WhaleTales.org.