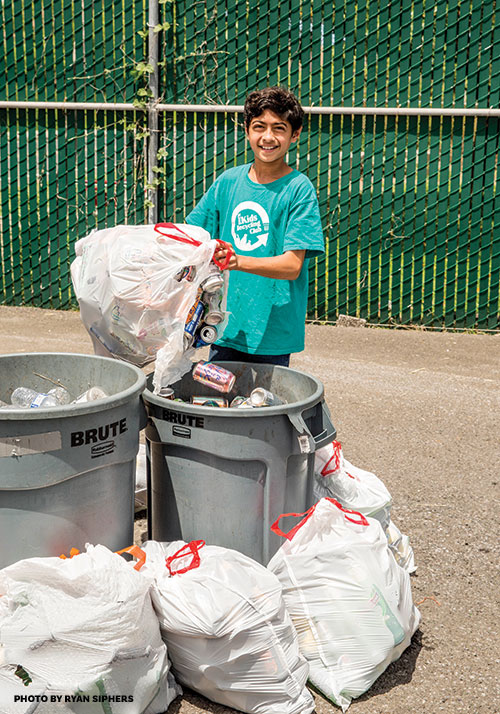 COOL AND COLLECTED: Last September, thirteen-year-old DJ Metzler of Makawao hatched an idea. “I decided to start a kids’ club where members would collect redeemable beverage containers from friends and neighbors, and take them to the recycling center.” The kids could keep half the proceeds, and the other half “would go into a ‘pay it forward’ envelope and be used to perform good deeds for our community.” With the help of dad Dustin, DJ launched Kind Kids Recycling Club, which now boasts 28 members and a Facebook page. DJ’s goal is 200 members by the end of 2018.

KIDS RULE: The club operates on the honor system: members take the Kind Kids Pledge not to charge supporters for picking up recyclables, and to put half the redemption money into a pay-it-forward envelope. Once a member completes three recycling runs and carries out three kind deeds, DJ presents him or her with a teal-and-white club T-shirt, purchased with recycling proceeds.

“When a club member earns their shirt, they often are so excited they jump up and down,” DJ says.

PICK THE KIND YOU LIKE: Club members decide for themselves how to use their pay-it-forward money. DJ says seven-year-old Peyton purchased Thanksgiving meals last November for two needy families; and twelve-year-old Emily, a cat lover, paid adoption fees for five felines at the Maui Humane Society. DJ himself has racked up numerous acts of kindness. One of his favorites was paying for a senior citizen’s medication at Longs Drugs. “I bought a $20 gift card, gave it to the pharmacy clerk, and asked her to apply it towards the next elderly customer’s prescriptions. Helping others makes my day. I’ve been bitten by the ‘kindness bug.’”

WANNA BET? Every other Saturday morning, DJ dons his Kind Kids T-shirt, grabs his work gloves and a supply of trash bags, and with dad Dustin at the wheel of their Honda Civic, visits his supporters to gather recyclable items. En route to the redemption center, DJ and Dustin wager on how much the load will net. “Our car holds about $80’s worth of recyclables,” DJ says. “We always come within a few dollars, and whichever of us guesses closest gets treated to a soda afterwards.”

To learn more about Kind Kids Recycling Club, or to become a member or supporter, visit their Facebook page or email KindKidsRecycling@gmail.com.