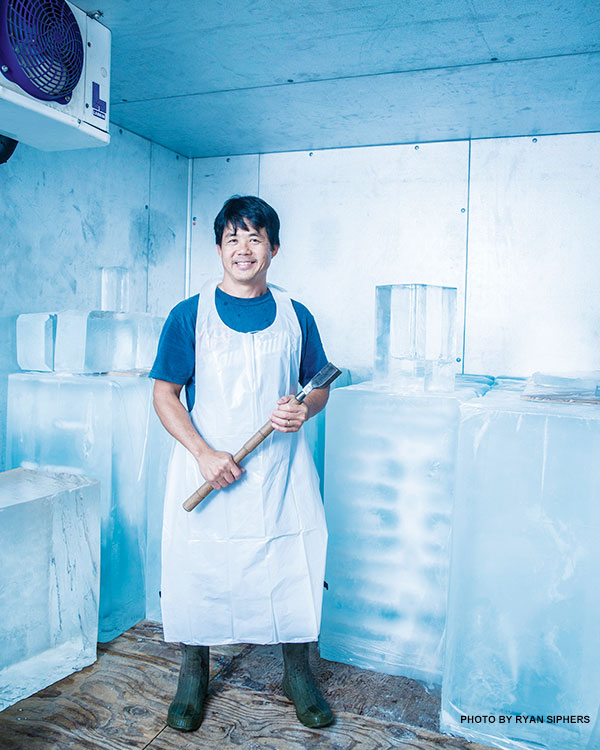 COOL CUSTOMER: When Darren Ho tells people what he does for a living, he’s often met with puzzled stares, scrunched eyebrows, and even a few chuckles. That’s what happens when you’re an ice sculptor in the tropics. As paradoxical as it may seem, he explains that the land of sunshine and palm trees is well suited for his work.

“Many people don’t realize that Hawai‘i is the premier destination for large conventions and weddings. Because of that, there’s a huge demand for extravagant parties, so I’m really in the right place for this,” he explains.

NEW KID ON THE BLOCK: Darren’s passion for ice carving began in the early eighties while he was working as a cook at the former Intercontinental Hotel (now Wailea Beach Marriott). The fact that he had never picked up a chisel before didn’t discourage him. He volunteered to create the ice sculpture for the resort’s Sunday brunch. To sweeten the deal, he offered to buy his own equipment and carve during his free time.

“I have a picture of my very first ice carving — it’s horrendous,” he sighs. “It was supposed to be a swordfish, but it looks like some kind of seahorse embryo.”

SUB HERO: Fast-forward three decades, and Darren has chipped away at more than 3,000 blocks of ice — sculpting everything from kissing swans and splashing mermaids to company logos and even a life-sized motorcycle.

Darren forms his frosty medium by pouring filtered water into a thirty-gallon freezer mold. To prevent a cloudy core or air bubbles, he uses a pump to circulate the water. The result is a 300-pound block of clear ice.

Wielding a chainsaw, he slices chunks off the massive block to form a rough outline, then uses power drills and chisels to bring the sculpture to life.

CHIP SHOT: On display, an ice sculpture lasts only four or five hours; Darren accepts that attachment to his work is futile. Instead, he catalogues his frozen art in photos, some of which line one wall of his Kahului workshop.

“As long as I get my picture, I’m fine,” he laughs. “You can’t go wrong with a medium like ice. No matter what you make, it’s going to look cool.” 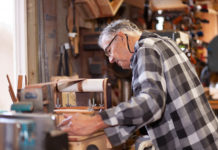