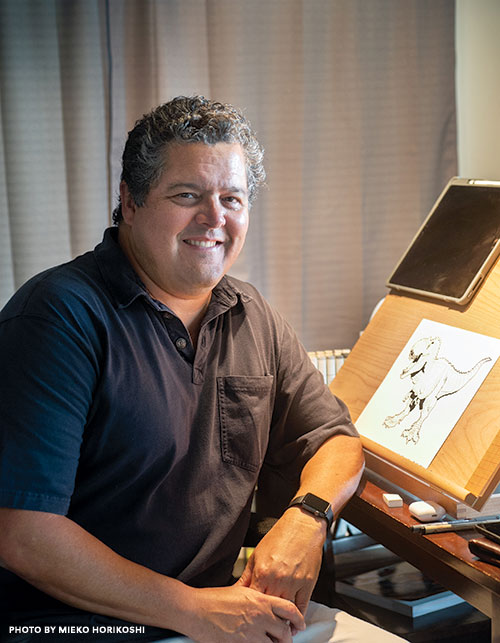 TO INFINITY AND BEYOND! Wake up. Pour a cup of coffee. Draw. That’s a typical day in the life of James Silvani. “I couldn’t imagine doing anything else,” he says. “I get paid to be a kid again.” James works out of his Kīhei home in a cozy studio filled with comic-book memorabilia, Disney figurines, and a life-sized Darth Vader mannequin. He knows the contours and color palettes of nearly every Disney/Pixar, Muppets, Warner Bros., Marvel, and DC Comics character (and when new ones are debuted, he expands his repertoire accordingly). There’s a good chance you’ve seen his handiwork somewhere: Over the years, James has freelanced for several big-name publishers and entertainment companies, and since 2010, he’s illustrated every issue of the Darkwing Duck comic-book series.

BOY WONDER: Like many preschoolers, three-year-old James loved to doodle. But unlike most kids his age, he preferred to do it with a fine-tip, black-ink pen—the same kind he uses today—on a sheet of typing paper affixed to a clipboard. By the time he was five, James had sketched hundreds of four-panel comics chronicling his adventures with Allowishes, a trusty dinosaur sidekick, in his hometown of Laguna Beach, California.

PEANUT GALLERY: When James was ten, his mother took him on an impromptu road trip to a Santa Rosa coffee shop where Charles Schulz frequently ate breakfast. That day, the “Peanuts” creator was sitting at his usual table with a plate of French toast. James shyly approached Schulz and asked if he’d look at a few of his drawings. “He told me, ‘These are really good. I think you have a future in this,’” James recalls. Then Schulz borrowed his pen and drew him a picture of Snoopy. The framed drawing now hangs on the wall of James’s studio.

HOLY DINOSAURS, BATMAN! James’s boyhood fascination with dinosaurs has yet to go extinct. “I never grew out of it,” he laughs. So, when an editor at Penguin Random House called to solicit ideas for a new “how-to-draw” book, James pounced on the opportunity to author and illustrate a book about the prehistoric creatures. In 2014, Draw-A-Saurus: Everything You Need to Know to Draw Your Favorite Dinosaurs hit the shelves, and it’s racked up rave reviews ever since.

How to Draw a Dinosaur by comic artist James Silvani

WITH GREAT POWER COMES GREAT RESPONSIBILITY: James doesn’t just sling ink in his studio all day. He’s a familiar face at national and international comic-book conventions, where he chats with fans and churns out commissions. He also draws free pictures for enthusiasts of all ages at the annual Free Comic Book Day events at the Kīhei Public Library and Maui Comics & Collectibles in Kahului. And what if he could tell his five-year-old self that he’d grow up to be a comic-book artist? “He would definitely think it was very cool,” James says. “And he’d probably say: ‘I told you so.’”