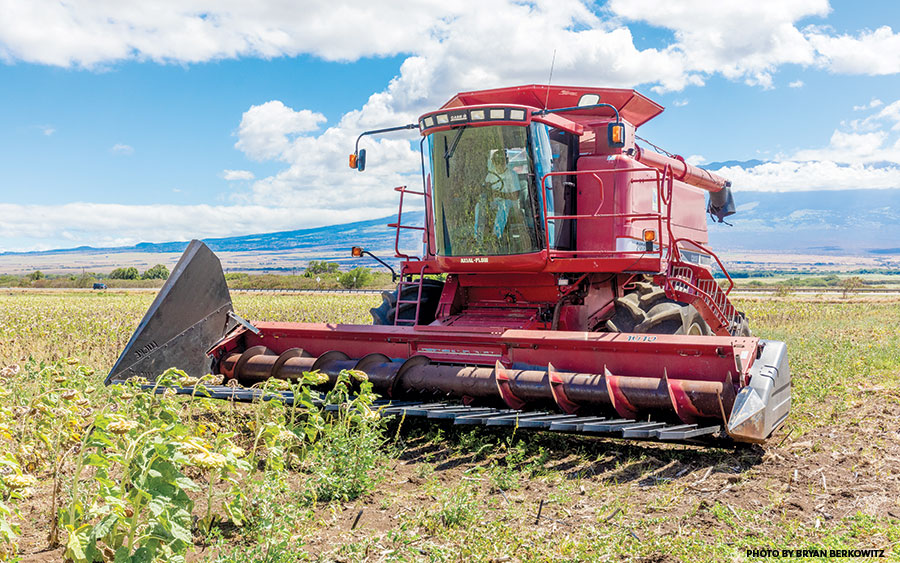 If one company’s vision bears fruit, the future will include a sea of giant yellow happy faces. The year after sugar shut down, golden blooms lit up fields in Central Maui. Thousands of tourists and residents flocked to the farm to snap giddy photos of themselves among the sunflowers. The showy plants turned the spotlight on Pacific Biodiesel, a family-owned and -operated company that has been working in agriculture and energy for the past two decades.

“There was a lot of excitement about the sunflowers,” says Kelly King, vice president of Pacific Biodiesel, which planted its first crop on former cane fields leased from the owners of Maui Tropical Plantation. King says the company has a longstanding commitment to producing a cleaner, greener alternative to petroleum-based diesel. Growing its own feedstock is the next step on that path.

Kelly’s husband, company president Bob King, knew the world of diesel as a mechanic; his business held a contract to maintain generators at the Central Maui landfill. He saw both waste and opportunity in the tons of used cooking oil pouring into the dumpsite. In 1999, the Kings opened their first refinery on Maui, turning grease into biofuel. In 2000, they built a second refinery on O‘ahu. In 2012, they shifted most of their operations to Hawai‘i Island, where their new, state-of-the-art refinery produces 5.5 million gallons of biodiesel annually.

Pacific Biodiesel employs eighty people statewide, and has built thirteen facilities across the U.S. and in Japan. But Maui remains home to its corporate office and a retail pump station. In recent years the company has pulled back from technology sales.

“We wanted to refocus on operating in Hawai‘i, making the best fuel we could,” says Jenna (King) Long, director of operations, and Bob and Kelly’s (locally grown) daughter. Long adds that they want to make the process, as well as the product, more sustainable. Currently the company collects oil across the state, sends it to the Big Island refinery, then ships the biofuel back to the other islands. That model is less efficient, and the supply of used cooking oil in the islands is limited. “We’ve been talking about growing feedstock almost since we started the company,” says Long. “We knew this would be the long-term way to expand.”

Federal funding aimed at advancing energy security supported the Kings’ search for the ideal biofuel crop, which led them to sunflowers. It takes only ninety days for the plants to go “from soil to oil,” and sunflowers have a flexibility bonus: you can eat the oil, make fuel out of it, turn the byproduct of the extraction process into high-protein livestock food, and even crush the stalks into fibrous building material.

Today, Pacific Biodiesel’s sunflower fields occupy 115 acres, planted in rotation in plots of 10 to 15 acres. The first harvest produced a cosmetic-grade oil; for now, you’re more likely to encounter it during a massage than at the pump. Kelly King says the company intends to scale up in steps, planting 100 acres and from there expanding to 500 or 1,000 acres. “If we can prove the economy and consistency of 1,000 acres, the [goal] would be to plant 10,000 to 12,000 acres.”

Sunflowers own the day for now, but King notes that different crops can feed a refinery, a big plus if a devastating pest or disease wipes out the original plant source. Long term, the Kings envision rotating fuel and food crops, such as soybeans or safflowers. If the model proves successful, each island could grow its own feedstock, recycle waste oils, and produce biofuel.