The plan has two key challenges: demand and funding. Long acknowledges, “We’re competing against petroleum diesel fuel, [whose] prices fluctuate daily. When [petroleum] prices are higher, it’s easier to get our fuel into the market.” The company has been working to secure a long-term commitment from more dependable consumers, such as the public-transportation sector, utility companies and the military, but has received mixed messages. “It’s a ‘Catch-22’ situation,” says King. “Hawaiian Electric Company will always need a source for firm backup power,” but without a commitment now to create that extra capacity, biofuel might not be there when it’s needed. Pacific Biodiesel continues to seek support at federal and local levels; in the meantime, the trials on Maui are self-funded.

Where do those challenges leave Pacific Biodiesel? And what do they mean for Maui?

Long says expansion into agriculture, cosmetics, and animal feed are all pieces in the sustainability puzzle—and the company’s continued viability. “We’re not going to grow a crop just to make fuel. We need to become a multifaceted company.” Diversification, she says, helps them get through times when fuel prices dive. “That’s one of the reasons we are the oldest continuing biodiesel company in the U.S.”

King highlights plans for more partnerships. “We never thought we’d be doing the growing, but farmers aren’t huge risk takers. We decided we’d have to show people [this economic model] could work.” And sunflowers aren’t the only reason King wants to encourage more farmers. Assuming permitting issues get resolved, the company is looking at hemp production, and has applied for a grant to train apprentice farmers on how to use heavy equipment for row crops. Based on the Kings’ track record, persistence seems likely to pay off.

The Pacific Biodiesel model might help define not only the look, but also the long-term trend for agriculture on Maui—a patchwork quilt across the island’s arable land, created by a host of players with vision and dedication, working together to increase our food and energy security.

“I used to have a picture of a sunflower field at the pump station at Pacific Biodiesel,” says King. “It was almost a life-changing moment when that first sunflower bloomed—a precursor of something coming down the pike.” 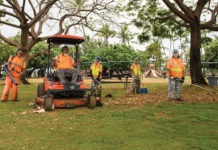