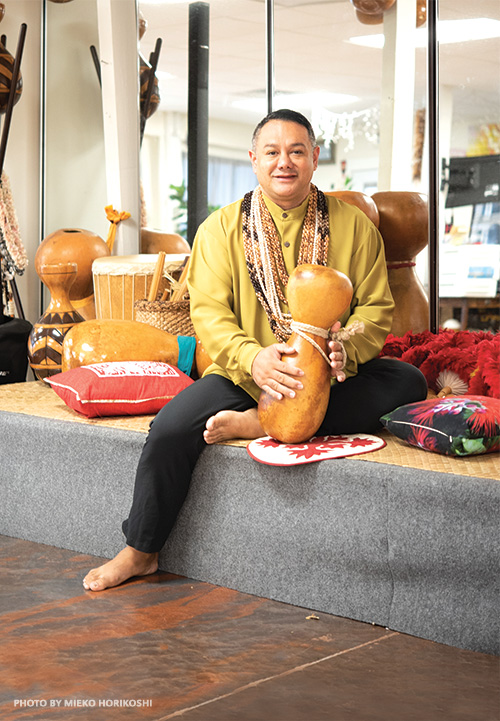 RISE AND SHINE: There’s no such thing as a typical day for kumu hula (hula teacher) Kamaka Kukona. The one constant? An early-morning walk with Murray, his fourteen-pound silky Jack Russell terrier. After that, he gets down to business: making travel arrangements, sewing costumes, and choreographing dances for his award-winning hālau (hula school), Hālau o Ka Hanu Lehua. “A day off? What’s that?” Kamaka laughs.

TRAVELING SHOW: When he’s not in his Wailuku studio, prepping for classes or working with hālau members (who range in age from three to eighty-five), Kamaka is gearing up to perform in hula shows. And once a month, he boards a flight for Japan, where he has studios in ten different cities (a sensei covers for him when he’s not there). Kamaka is accustomed to the hustle and bustle. “I don’t know any other lifestyle,” he says.

QUICK STUDY: Kamaka was five when his mother signed him up for hula lessons, and it quickly became evident that he had a knack for it. It wasn’t long before he caught the eye of hula master Mae Kamāmalu Klein, who invited Kamaka to start the ‘uniki (graduation) process at the tender age of nineteen—something of a rarity in hula.

MOVING PERFORMANCE: In 2004, after six years of rigorous training, the newly minted kumu hula formed his own hālau. It was far from an overnight success: Kamaka says prospective students were wary of taking lessons from a novice twenty-five-year-old. But as word of his talent and tutelage spread, Kamaka’s roster grew. In 2007, his then-fledgling hālau was invited to the Merrie Monarch Festival, Hawai‘i’s largest and most prestigious hula competition, where his dancers placed fourth in the kane (men’s) kahiko (ancient hula) division. Kamaka says stepping onto the Merrie Monarch stage was a surreal moment. “It took my breath away,” he recalls. “I’d dreamed about being on that stage ever since I was a kid.” And it wouldn’t be the last time. In 2018, Hālau o Ka Hanu Lehua placed fourth at the annual competition in the wahine (women’s) ‘auana (contemporary hula) division.

LABOR OF LOVE: Kamaka teaches his students the intricacies and nuances of hula—from protocols, to footwork, to the use of traditional dance implements. Like other kumu hula, he imparts broader lessons, too: discipline, confidence, humility, and respect. “Hula carries over into our everyday lives,” he explains. His greatest joy? “Watching the kids I teach turn into well-rounded adults,” Kamaka says. “I love knowing I played a part in helping them become good human beings.”