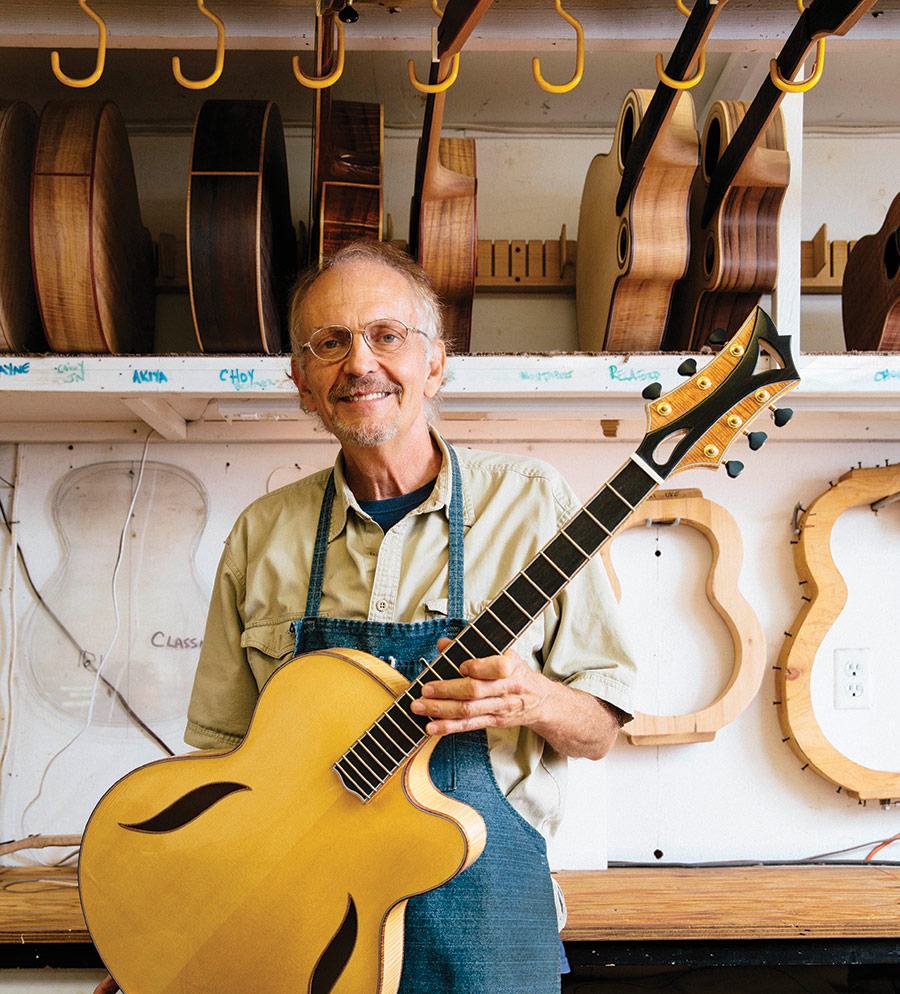 MUSIC MAN: While living in Washington, Steve Grimes began restoring broken instruments salvaged from thrift stores. “I’d buy them for $5 and repair them with the meager tools I had,” he says. Today he is one of the world’s top luthiers; the finest stringed instruments he makes sell for upwards of $22,000. He built his first — a mandolin — in 1972. When Grimes moved to Maui in 1982, his focus shifted to guitars. To date, he’s crafted nearly 900 instruments, including several ʻukulele.

LISTEN UP: When it’s time to “voice” the soundboard, removing layers of wood to achieve a richer sound, Grimes admits he’s low tech. “There are people who have this down to a science with holograms and frequency testers, but my science is right here,” he says, pointing to his head. “With my fingers tapping various parts of the guitar, I can hear a tonality and know that it’s done and ready for the finish.”

FUNCTION AND FORM: His guitars are often asymmetrical, crafted with several woods, and inlaid with custom designs. “I think with age and experience comes a certain liberation,” says Grimes. “I’m taking liberties and creating art as well as music.”

GUEST STARS: Grimes’s upcountry workshop is a mecca for guitar aficionados. The 1,100-square-foot space — which includes a soundproof music studio — is embellished with photos of famous clients. “My banner day was when Steve Miller walked into the shop,” says Grimes, pointing to a photo of the music legend. “I’d never met him; I don’t know how he found me, but he walked in and wanted to order a guitar.” Miller ordered eight instruments that day.

QUALITY CONTROL: Miller may have been a surprise guest, but jazz icon and ten-time Grammy winner George Benson was a regular. “George was living in Ka‘anapali, and it was his routine for two years to come up here every Friday morning and play guitars,” recalls Grimes. “I called him my quality-control expert.”

HARDLY WORKING: Grimes’s instruments are so coveted, there’s a two-year waiting list. “People will ask me, ‘Do you just work all the time?’ I tell them I never work, because it’s all play. If I were to win $100 million dollars, I would buy better tools and a bigger shop — this is my lottery right here.

Learn more at grimesguitars.com, and watch a video of Grimes at work at mauimagazine.net/SteveGrimes.