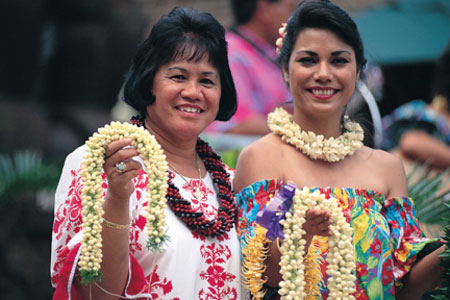 I ka wa mahope i ka wa mamua.
The future is in the past.

As a young girl growing up in Lahaina town, Lori Sablas used to travel with her father to Pu‘u Keka‘a (Black Rock) on Ka‘anapali Beach to lay lobster traps. She remembers observing in silence as her father delicately dropped the net onto the ocean floor, then watching in awe as he pulled their dinner to the surface. One by one, the pair would examine each lobster, keeping only those they would eat and returning the excess.

“That was my first lesson on malama [to care for] and I’ve never forgotten it,” says Sablas.

Today Sablas is the program director for the Ka‘anapali Beach Hotel’s Project Po‘okela, for which she develops curricula to teach the hotel’s nearly 300 employees about Hawai‘i’s history. As a cultural specialist, Sablas works to preserve the culture through education.

In the past, she has partnered with various local organizations to integrate lessons on the host culture with Project Po‘okela classes. One such group is Maui Cultural Lands, Inc., which has initiated the grassroots effort Malama Hono kowai to restore Honokowai Valley, located above Ka’anapali. Although the area is now covered in overgrowth and invasive species, it was once home to an estimated 600 Hawaiian families. Inspired by the work being done there, Sablas has created Project Po‘okela classes based on the restoration of this ancient archeological site. Sablas feels that by educating hotel employees, who can then pass that knowledge to their communities and guests, the program is helping preserve Hawaiian culture.

“I want to help bring awareness to this project that benefits Hawaiian culture. It’s important to use it as a learning tool and bridge the gap for our employees and visitors,” she says.

Sablas’s passion for preserving the Hawaiian culture has been a lifetime in the making. At 63, she has amassed a wealth of community involvement, including serving as a board member for the Lahaina Restoration Foundation, a founding board member of the Native Hawaiian Hospitality Association, and an active member of Maui Hawaiian Agencies and Organizations.

“As leaders in this industry, we have an obligation to offset the changes we have caused to this island. We need to ask ourselves, ‘How can we give back to this place that has given us so much?’,” she says.

Despite her peaceful demeanor and friendly approach, Sablas is a woman who fights for what she is passionate about. As a founding member and the current treasurer of the nonprofit Friends of Moku‘ula, she has dedicated her efforts to reviving the ancient Hawaiian site, located in downtown Lahaina. Sablas has been instrumental to the group both as a policy maker and a fund raiser for the site’s restoration.

Today the area lies buried under a baseball field, but in ancient Hawai‘i, Moku‘ula was the political center and spiritual home of Maui’s chiefs and was once the home of King Kamehameha III and the resting place of his sister, Princess Nahi‘ena‘ena. For unknowing passersby, this barren piece of land is nothing more than a lifeless mound of dirt. For Sablas and others, it’s a vision of what the area might someday become as a historic preservation site. In addition to reestablishing the lo‘i (taro patch), the hale (house) and loko i‘a (fishponds), Friends of Moku‘ula hopes to revive the area by building a living-history center where people can immerse themselves in the pre-Contact Hawaiian lifestyle.

Early life was simple for this Maui girl. She describes growing up in a Lahaina plantation community during the 1940s and 1950s as an “idyllic childhood.” Ka‘anapali Beach was a vast sea of kiawe trees where she and her friends spent the day playing, entertaining themselves in their natural playground. When they were hungry, the nearest mango or guava tree provided a quick snack.

The tide would soon turn for the quiet island, as developers saw another use for the beachfront land. By 1963, when Sablas graduated from Maui Community College, the visitor industry was slowly replacing agriculture as Maui’s number-one industry.

Sablas worked in the visitor industry for the next 10 years; she then spent another decade traveling throughout Europe and living on the U.S. Mainland. Success came easily for Sablas, who soon found herself working at a lucrative job, living in a stylish apartment, and driving a brand new car. Despite her material accomplishments, she knew that something essential was missing in her life.

“I asked myself, ‘What makes you really happy?’” she remembers. “The answer was my ‘ohana [family]. I was missing that connectivity with the people I grew up with and the island that I love.”

In 1979, she returned to work in the visitor industry, this time as managing director of the Ka’anapali Beach Operators Association, coordinating the resort’s marketing efforts. “It was a dream job,” Sablas says in a blissful tone. “I got to travel all over the world to talk about the place I love and grew up in,” she says.

There was also a lot of responsibility. She needed to showcase Hawai‘i to people who had never experienced the Islands. With her infectious aloha spirit and passion for Hawaiian culture, Sablas was the perfect person for the job.

“We need to look at ourselves as stewards of this ‘aina [land] and take responsibility for keeping it special. That is the true meaning of malama.”

It’s important, Sablas says, to not only revive Moku‘ula, but also to educate the public about the significance of this place. She pauses, then recites the ‘olelo no‘eau (Hawaiian proverb) that is a common theme among the Friends of Moku‘ula.

“I ka wa mahope i ka wa mamua.” After a moment of silence she continues. “The future is in the past.”

Listening to this simple saying spoken with such clarity is humbling. Like many of the values that Sablas lives by, this basic principle seems so clear. It’s the kind of philosophy that has kindled her spirit for years. Just as she learned as a young girl hunting for lobsters at Pu‘u Keka‘a, caring for the ‘aina today is the only way to keep it viable for tomorrow.